While India Reels Under Blazing Heatwaves, Kashmir Gets Its First Snowfall

As the mercury rises to 50 degree Celsius in Delhi, Punjab and Haryana, Kashmir gets its first bout of snow.

While most of India is reeling under the soaring mercury levels and blazing heatwaves, the Kashmir Valley gets its first snowfall. The places that have received fresh snowfall include the upper reaches of Kashmir Valley like Gurez, Peer Ki Gali, and Sonmarg as well as other adjoining areas of the Ganderbal district.

While the locals are distressed about the untimely occurrence of snowfall, saying that it’s a huge indication of climate change, it’s a great time for people in the Northern cities to head to Kashmir. It’s after a long time that the upper reaches of Kashmir has seen snowfall in the month of June.

The whole of India is the victim of climatic disparity at the moment; while Gujarat is gearing up for the severe cyclonic storm ‘Vayu’ accompanied with heavy rainfall heading towards it with the speed of upto 130kmph, states like Rajasthan, Punjab, Haryana and Delhi are bearing the brunt of the most intense and longest heatwave in three decades, along with temperatures flaring up to 50 degree Celsius. 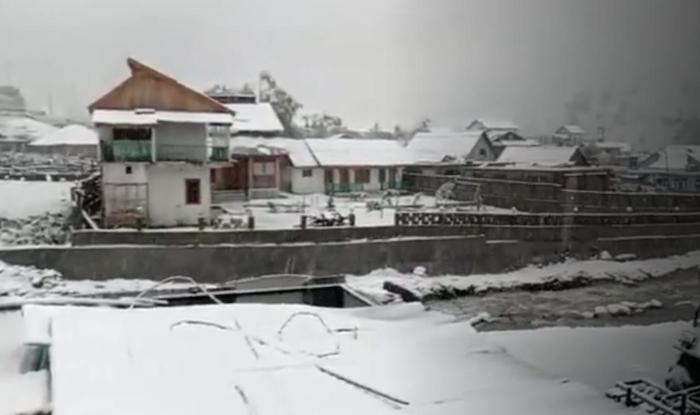 While in Kashmir, what started off as rain in the lower reaches, went onto becoming a round of snowfall, as the temperatures dipped lower than the freezing point in certain areas of Central Kashmir like Baltal, Zojila and Sonmarg. The weather reports predict heavy rainfall this week in places like Gulmarg (96mm), Kupwara (42mm), Poonch (42mm) and Pahalgam (52mm).

Local reports have added that places like Gumri Zojila Pass, Drass Kargil, Minimarg, and Zero Point have already received such heavy snowfall that these places are almost covered in two inches of thick snow.

Also, the Ladakh-Kashmir Highway has been affected. Usually, it remains closed during winter months in anticipation of fatal accidents courtesy of the snowfall and slippery road conditions; however, it had to be closed during this untimely bout of snowfall. Also, passengers and drivers en route Zojila and Ramban-Banihal axis are requested to be very careful of landslides and shooting stones.