Why do we celebrate Diwali?

Rama's return to Ayodhya and Guru Hargobind's release from Mughal captivity are just two of the many reasons we celebrate Diwali. 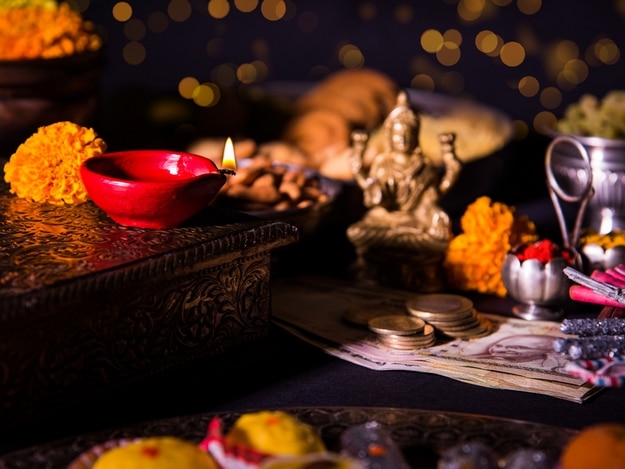 Did you know just why we celebrate Diwali?

Diwali, the festival of lights celebrates the victory of good over evil. In ancient India Diwali was a major harvest festival and the lighting of the lamps was associated with sun. The tiny clay lamps would symbolically signify the sun. The origins of Diwali are varied. But why do we celebrate Diwali? Here are seven reasons why we celebrate Diwali in India. Also Read - Is it Diwali, Chhath Already? Migrants Face Heartbreaking Queries from Kids About Sudden Home Visit

1. Return of Rama to Ayodhya

This is perhaps the most popular and widespread belief. And while this is true, the return of Rama to Ayodhya is certainly not the only reason why we celebrate Diwali. According to Ramayana, Dashratha, the father of Rama and the king of Ayodhya owed his wife Kaikeyi a favor. At an opportune moment, Kaikeyi sought to cash in on the favour and asked that the king banish Rama the kingdom’s favorite crown prince from the kingdom for 14 years and place her son, Bharata on the throne. The heartbroken king kept his word and banished Rama from Ayodhya. For the next 14 years, Rama and his wife Sita along with his brother Lakshmana wandered the forests of India. Their wanderings were interrupted by Ravana the king of Lanka who abducted Sita. After an epic battle, Rama, Lakshmana and Sita returned to Ayodhya and its subjects welcomed them by lighting oil lamps outside their homes and showing their favorite prince the way back home. Also Read - Delhi Bursts Crackers to Celebrate Coronavirus Like Diwali After Misunderstanding PM's '9 Baje 9 Minute' Requests - Check Tweets

2. Birth of Lakshmi, the goddess of wealth and her wedding to Vishnu

Diwali is primarily a celebration of wealth. And it is thus that Lakshmi find herself in the midst of the narrative. Legends suggest that this is the day when Lakshmi was born’ out of the Samudra Manthan (or the Great Churning of the Ocean). Samudra Manthan is a mythical event that finds mention in the Puranas. The event refers to the churning of the Ocean of Milk by the gods and demons. It involved Mount Mandara that served as churning rod and Vasuki, the king of serpents, who resides around Shiva’s neck served as the churning rope. Among the wondrous things that emerged from this churning was Lakshmi. It is believed that Lakshmi emerged from the ocean on this day and was immediately married off to Vishnu. The wedding was celebrated by the lighting of oil lamps.

3. The killing of Narakasura

According to legend, Narakasura was the son of Bhudevi, the Earth goddess and Varaha, the third incarnation of Vishnu. However over time Narakasura turned evil and he began expanding his reign and capturing kingdom after kingdom. He then trained his guns towards the heavens and overthrew Indra the king of the gods. To make matters worse he stole the earrings of Aditi, the heavenly mother goddess, usurped some of her territory, and kidnapped 16,000 princesses. The gods sought the help of Vishnu since it was predicted that his incarnation would be responsible for killing Narakasura. Vishnu, so the legend says, was born as Krishna and eventually married Satybhama who was also believed to be an incarnation of Bhudevi, the mother of Narakasura. Satyabhama was outraged at the ill-treatment of the princesses at the hands of Narakasura and urged her husband to wage a war against him. On the night before the New Moon, Krishna killed Narakasura and freed the 16,000 princesses. This day is celebrated as Narak Chaturdashi since it is the event took place 14th day of the month. In Goa, large effigies of Narkasura are burnt to commemorate the event.

DON’T MISS How Diwali is celebrated in Varanasi

4. The killing of the demons, Shambhu and Nishambhu

Shambhu and Nishambhu were two demons who wreaked havoc not just on earth but also in the heavens. Just like the mortals on earth, the gods too felt terrorized by these asuras. With every new battle, the demons grew stronger and the gods more desperate. All seemed to have been lost for the gods who, by now, had taken refuge in the Himalayas. The gods sought protection from Durga, the goddess of Shakti. And it was thus that Kali was born from Durga’s forehead. Her sole purpose was to destroy the demons and save the universe. Kali set out to kill Shambhu and Nishambhu along with her escorts Dakini and Jogini. Another battle ensued at the end of which the two demons were killed and a victorious Kali made a garland of their heads and wore it around herself.

But this isn’t where the story ends. Somewhere in the midst of all the bloodshed, Kali lost control and began destroying everything and everyone that stood in her path. The joy of the gods was short lived and they watched in horror Kali’s rage filled destruction. Finally, to stop this endless slaughter, Shiva threw himself in the path of Kali. When the goddess inadvertently stepped on him, she regained her senses and stopped in her tracks. The well-known image of Kali with her tongue sticking out is that of shock at stepping over Shiva.

Kali Puja is an important day in the Diwali celebrations in Assam, Bengal and Odisha.

CHECK OUT How Diwali is celebrated in West Bengal

5. The release of Guru Hargobind

The sixth Guru of Sikhism became the leader of his community after the Mughal emperor Jahangir executed his father Guru Arjan. Guru Hargobind is credited with ushering in martial tradition in the Sikh religion. It was this very practice that earned the ire of Jahangir who imprisoned Hargobind inside the Gwalior Fort. While it remains unclear how many years he spent in captivity, the guru was released around 1611 or 1612. But Hargobind wasn’t the only one imprisoned in the fort. Along with him were 52 kings who had rebelled against the Mughal Empire. During his time in prison, Hargobind had become a spiritual mentor of sorts to these 52 kings who were clearly upset over losing his company. And so Hargobind requested that they be released along with him too and stood as surety for these kings. Jahangir, who by now, had reverted to Akbar’s policy of religious inclusion accepted the request and the 52 kings were released along with Hargobind.

This is the reason why Sikhs also celebrate Diwali, which is primarily a Hindu festival. And Amritsar’s Golden Temple, the most important shrine of the Sikhs is lit up and shines brighter than ever during Diwali.

ALSO SEE How Diwali is celebrated in Punjab

It isn’t just the Sikhs who celebrate Diwali besides the Hindus, the Jains do it too. However, unlike the other two, the Jain community does not believe in lighting fire crackers because they believe it harms other living beings. Hence the small but prosperous Jain community celebrates Diwali in its own quiet way. The reason for these celebrations is to commemorate Mahavira’s attainment of Moksha or eternal bliss. But it wasn’t just Mahavira’s big day; his disciple of Ganadhara Gautam Swami also reached a state of Kevalgyana on the day, making Diwali all the more important to the small but prosperous Jain community.

7. End/beginning of the harvest season

The general belief is that Diwali is the festival of merchants — and this is true to a very large extent — but in ancient India Diwali was also a major harvest festival and thus celebrated as much by the farmers as by the merchants. It is around this time of the year that the Kharif harvest season draws to a close and the farmers celebrate this by making delicacies out of poha or puffed rice taken from the freshly-harvested crop. In Gujarat too, the time marks the beginning of a new harvest season and traders also close all financial accounts and clear debts for the year to begin afresh.

ALSO SEE How Diwali is celebrated in Gujarat