Jaddu's wildlife safari photos are going viral for all the wrong reasons. 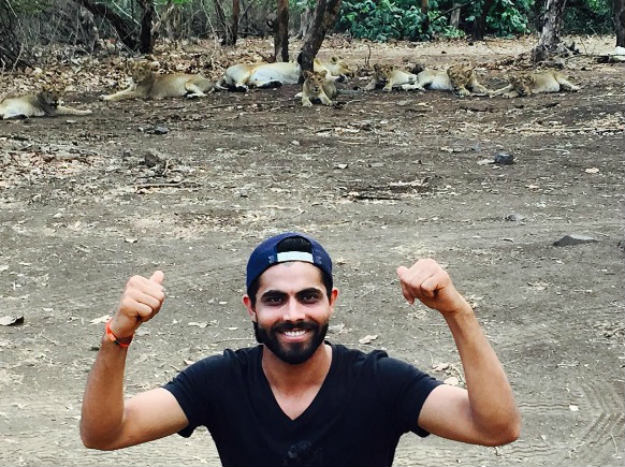 Ravindra Jadeja or fondly called Jaddu is not just passionate about cricket, he is also an animal lover and was recently on a wildlife safari in Gir  National Park and Sanctuary. While he had a splendid time in the wild with his wife, his recent photos could land him in trouble. The cricketer posted photos and selfies on his Instagram handle of himself and his wife posing with Asiatic Gir lions. Here’s why these photos are controversial: Also Read - Gir Lion Deaths: Matter 'Very Serious', Supreme Court Asks Centre to Look Into 23 Deaths in Three Weeks

These photos of Jadeja with the big cats show him very close to the lions. Gir National Park and Sanctuary is a protected area and tourists aren’t allowed to get off from their jeep safari. These photos went viral on social media and caught the attention of Gujarat Forestry Department who had recently warned people to not get off from the safari and take selfies with the Asiatic lions. There have been incidents in the past of villagers getting attacked and injured by the big cats by going too close to them. Since Jadeja broke this rule, there could be an action taken against him. Also Read - Gujarat Forest Department Forms 64 Teams to Look Into Sick Lions in Gir Forest

Gir forest is the only place where Asiatic lions are allowed to remain in the wild and are an endangered species. An inquiry has been ordered to look into the matter and find out why the cricketer and his wife were allowed to get off from their vehicle when it is strictly forbidden. Some forest guards who accompanied the couple also joined the act and could face action against them.

The Asiatic lions at Gir are a popular tourist attraction but caution should be maintained to not disturb them or get harmed. Celebrities have the responsibility of being careful of their actions as they can influence several people at once. We hope Jadeja doesn’t repeat it again and keep his love for animal restricted to a safe distance. After all, we wouldn’t want to lose him to a big cat attack.