One of the oldest caves in the country, the Ajanta Caves are 30 odd rock-cut caves that date back to the second century BC. These Buddhist monuments are known for their murals, paintings and sculptures that have defined Indian art over time. Today, they are a UNESCO World Heritage Site and a protected monument under the Archaeological Survey of India. Even though there were 30 caves, they were built in two phases and provided shelter to Buddhist monks who came here to meditate during the monsoon. Even today, the caves can cast a spell on you with their artistic beauty and give you a peek into our history. An inspiration to today’s Indian art, the paintings that are centuries old tell a story of our ancestors and how they lived their life. Ajanta Caves are a must-visit for any art and history lover. Here’s everything you need to know about Ajanta Caves.

Ajanta Caves are in Aurangabad in Maharashtra. It is well-connected by roads and is accessible from all major cities in the state like Mumbai, Pune, Nashik and others like Hyderabad, Ahmedabad, Indore, etc. There are state transport buses available or you can even book a taxi or go to Ajanta Caves by car.

If you prefer taking the train, the nearest railhead is Jalgaon which is 59 km away from Ajanta Caves. Most trains halt here and you can take a taxi to reach the caves after alighting here. But if your train doesn’t stop here, you can get off at Bhusaval railway station also.

The nearest airport to reach the caves is the Aurangabad Airport that is 99 km away from Ajanta. You can take private taxis available outside the airport to head to the caves. Flights from major cities like Mumbai, Delhi, Jaipur and Udaipur fly to Aurangabad.

Ajanta Caves are open throughout the year on all days of the week except Mondays. Tourists can visit the caves from 9 am to 5.30 pm. ASI has made online booking of tickets available on its website and you can book your tickets before your visit. If you are planning to do a group booking, note that you cannot book tickets of more than 20 adults and 10 children in one go on their website. Here is the booking link of the ASI’s website: http://asi.payumoney.com/#/Common/Booking/Index

The charges for a visit to Ajanta Caves are as follows:

Children below 15 years of age have free entry and adults above 15 have to pay Rs 30. For citizens of SAARC nations like Nepal, Bhutan, Maldives, Pakistan, Sri Lanka and Myanmar, the ticket price is the same as for Indians. But for foreign nationals of other countries, the ticket price is Rs 250 per visit. You can carry your and still and video camera inside the caves by paying Rs 5 for them. But note that you cannot do photography with flash.

It is best to make prior arrangements of your return journey before your visit as it can be difficult to get a ride back from the caves. Book a taxi for the complete trip or take your own vehicle to avoid any inconvenience later. 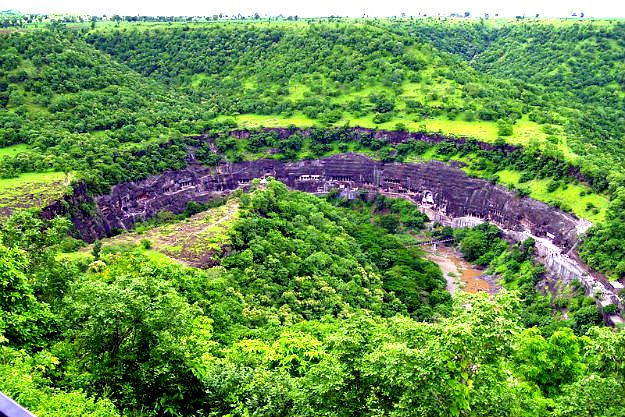 Ajanta Caves were carved out of a 250 ft wall and had monasteries and Buddhist halls of worship. The paintings represented the different lives and rebirths of the Buddha with sculptures of other Buddhist deities from 2nd to 5th century BC. In fact, some of these caves are noted for being the largest surviving ancient Indian wall painting. The caves remained hidden until the 17th century when a British officer accidentally discovered these while on a hunting trip. However, Ajanta Caves have been mentioned in the memoirs of Chinese Buddhist travellers who came to India in the medieval era.

The first cave to be discovered by British officer John Smith was the entrance to Cave 10. He along with the people of a nearby village, made a clearing to make the caves more accessible. He even scratched his name date on one of the cave walls that had a painting of a Bodhisattva. After their discovery, these caves were numbered from 1 to 29 but later more such caves were found in-between the existing caves so they were numbered with a suffix of an alphabet such as 14A if it was a cave found between already numbered caves of 14 and 15. However, one should note that this isn’t the order in which the caves were built, rather the order they were found in. A few decades after the discovery of Ajanta Caves, they became an exotic location with beautiful paintings and a unique setting.

The earliest group of caves to be constructed as per historical records were Cave 9, 10, 12, 13 and 15A. These belonged to the Hinayana (smaller vehicle) tradition of Buddhism and were from the first or Satavahana Period. The second phase started much later in the 5th century during the reign of Hindu Emperor Harishena from the Vakataka Dynasty. This phase is regarded as the Mahayana (greater vehicle) tradition of Buddhism.  It is believed that most of the caves were built during this phase and many older ones were also refurbished. Cave 1 to 8, 11 and 14 to 29 are from this period.

But it wasn’t the British but the Nizam of Hyderabad whose territory the caves fell in during the colonial era. And, in 1920s, he converted the site into a museum by restoring the artwork and building a road that led to the caves. He welcomed tourists to come visit the Ajanta Caves for a small fee. Post independence, the Maharashtra Government built facilities and managed the historical site. However, the early influx of tourists to the caves also resulted in their deterioration. 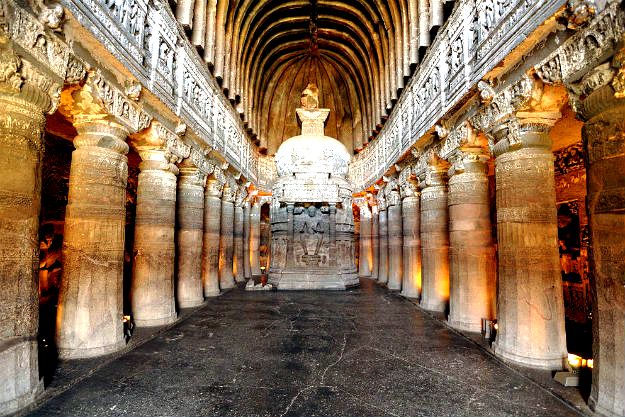 Even though Ajanta Caves were the resting place of Buddhist monks where religious activities were practised, the paintings and murals inside the caves even during that time were bold and artistic. They admired physical beauty of men and women and were sensuous and colourful, celebrating life. Paintings from Buddha’s life, decorative motifs and elaborate scenes are part of the artwork at Ajanta Caves. Several attempts have been made in the past to copy the paintings of these caves in other parts of the world as they began deteriorating. However, most of it was destroyed due to natural calamities.

Most of the caves at Ajanta were either viharas or monasteries, or chaitya-griha or worship halls also called the house of the stupas. The architectural style followed for building these caves was Cathedral style and therefore they resembled a Christian church without the chapel or cross. High ceiling and carved doors and windows and walking space behind the stupas for pradakshina was a set style of many caves. Even though the caves are largely Buddhist in nature, they were built by Hindus as at that time Buddha was revered in Indian culture and the paintings at Ajanta Caves not just influenced Indian art but paintings in Tibet and Sri Lanka as well. Inside the caves, you will find names of many Hindu donors inscribed on the walls for their contribution to build the caves and other religious structures part of Buddhism.

Some notable caves to see when here include Cave 1, 2, 4, 9, 10 and 17. Cave 1 has one of the most elaborate facades with sculptures and decorative carvings and embellishments. It is also the first cave you will visit when here. The walls in Cave 1 are covered with paintings depicting stories of Buddha’s life. Adjacent to Cave 1 is Cave 2 which is in a better state and is known for its paintings of powerful women, deities and goddesses. Cave 4 is regarded as the largest monastery planned but never finished. It has a sanctum with unfinished cells, a verandah and a hall. It also has an image of Buddha in a preaching pose with bodhisattvas and celestial nymphs on the sides. Cave 9 and 10 are chaitya-grihas or halls of worship with 10 built at least a century before 9. The paintings in Cave 10 are scattered and display works of different artists without any unifying theme. Much work lies incomplete till this date. Some of the best-preserved paintings lie in Cave 17 which is a vihara or monastery. Its entrance is flanked by two large stone elephants and inside you will find a porch and number of pillars, each with a distinct style. Carvings of Indian gods and goddesses, Buddha, artists and kings adorn the walls of this cave. Other scenes of a woman applying make-up, lovers, couples, wine drinking sessions, etc also feature on the walls.

Professor Walter M Spink is the person who is widely regarded as the world’s leading expert on Ajanta Caves and his studies and chorological methods used to determine the dates of excavations of these caves are highly accepted. After you’ve admired the brilliance of Ajanta Caves, move on to Ellora Caves that display more than just Buddhist life. 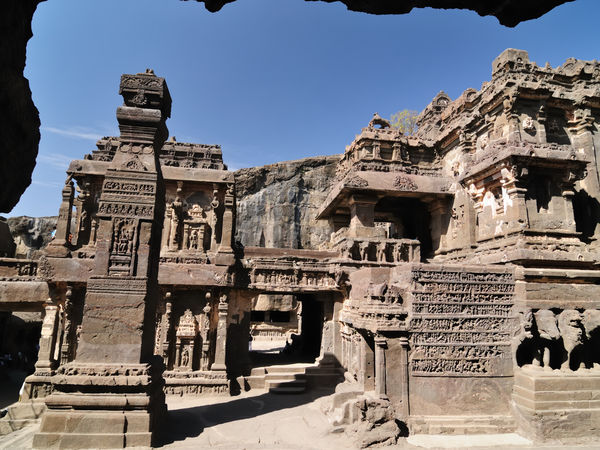 A short distance away from Ajanta Caves are another set of rock-cut caves called the Ellora Caves. These too are protected by the ASI and are a UNESCO World Heritage Site. The distance between the two caves is about 100 km and you can cover the distance by road within two-and-a-half hours. Out of the 100 caves at Ellora, 34 are open to public and cave number 16 is the largest single monolithic rock excavation not just in India but the world. The cave is actually a temple dedicated to Shiva. It is a chariot-shaped monument and named the Kailasha Temple. It also houses gods and goddesses along with relief panels depicting legends from Hindu epics.

What is interesting to note is the fact that these caves are grouped together based on their carving and architecture. So you will find 12 Buddhist caves, 17 Hindu caves and 5 Jain caves at Ellora. All these groups are in close proximity and were in fact built by Hindus. This also shows that these religions co-existed in peace even at that time. The groups have their religious monasteries and deities that make it easier to identify which cave belongs to what group. The Hindu and Buddhist caves at Ellora were built by the Rashtrakuta Dynasty while the Jain caves were built by the Yadav Dynasty. Before Ellora Caves became an archaeological site, they were meant to be monasteries for Buddhist monks and resting place for pilgrims who came here to pray at the various temples.

The caves at Ellora have many inscriptions that date back to as old as the sixth century. One of the most popular one is the inscription of Rashtrakuta Dantidurga, the founder of the Rashtrakuta Empire, in Cave 15. It is on the back wall of the front mandapa. The inscriptions are proof that he offered prayers in the temple. Jagannatha Sabha, a Jain cave has the names of monks and donors inscribed at three places. Do take a look at these inscriptions when you visit Ellora Caves.

The caves remain open for tourists all days of the year expect on Tuesdays. You can visit Elloa Caves between 9 am to 5.30 pm, they are located on the Aurangabad-Chalisgaon Road and both taxis and busses are available to reach them. If you are flying to Aurangabad Airport, the caves are merely 37 km away from here and private cabs are available right outside. The entry fee for Indians and nationals of SAARC countries is Rs 10 while for foreign nationals of other countries it is Rs 250. Photography is allowed inside the caves but you will have to pay Rs 25 for your still and video camera.

Along with Ajanta Caves, the caves at Ellora make for a unique tourist spot that takes you back in time and shows you how people lived their lives back then. Certainly, a must-visit attraction for Indians and anyone with a passion for history and art.

Things to do in

Things to Do in aurangabad