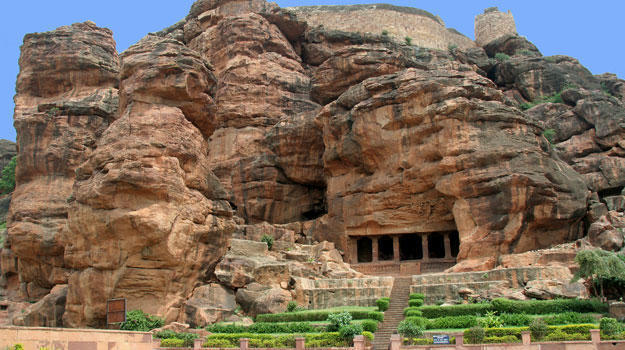 Once the capital of the mighty Chalukyas, Badami, located in Bagalkot district of Karnataka, is known for its rock-cut temples built in 5th and 8th century AD. The town faces the Agastya lake which is surrounded by two hills, Vatapi and Ilvala named after the two demon siblings who wreaked havoc in the region till the sage Agastya outsmarted them.

Badami became the capital of the Chalukyas, after they moved their capital from Aihole. The Chalukyas ruled the region between 6th and 8th century. While Pulakesi laid the foundations of Badami it was his son Kirthivarman and his brother Mangalesha I who built several cave temples in the town. During the reign of the Chalukyas, four rock-cut cave temples were constructed. While three are dedicated to Hindu gods, the fourth temple is dedicated to Jain Tirthankars. ALSO SEE 15 breathtaking photos of Hampi and Badami in Karnataka!

Badami is also a good site to indulge in adventure activities like rock climbing, trekking and cave exploration.

BEST PLACES TO STAY IN BADAMI

There are plenty of accommodation options in Badami. One can opt for budget and mid-range hotels with good facilities.

BEST PLACES TO EAT IN BADAMI

There are many multi-cuisine restaurants in Badami which serve north Indian, Continental, south Indian cuisine as well as Badami’s local cuisine, a variety of rice dishes, chutneys.

The average minimum and maximum temperature of Badami is as given below. The best time to visit Badami is also specified.


Place to visit in BADAMI

THINGS TO DO IN BADAMI

All Adventure Shopping
View all things to do in BADAMI

View all articles about BADAMI

Things to Do in badami