Capital of the Bijapur Sultanate, this medieval city in Karnataka is known for its fort, gardens and mosques. Founded by the Chalukyas in the 11th century, Bijapur’s regal monuments attract a large number of tourists. The town was ruled by the Chalukyas from the 11th-12th century and was known as Vijaypur (or the City of Victory). Under the Bahamani Sultnate of Gulbarga, it was rechristened Bijapur.

Its golden age was under the Adil Shah dynasty, which was founded by Yusuf Adil Shah in the 15th century. Under the rule of the sultans of this dynasty, the city saw a significant increase in architectural marvels, many of which are in a good condition even today. ALSO SEE The real reason why Gol Gumbaz is the best jewel in Karnataka’s crown

The city boasts of more than 50 mosques, 20 mausoleums and many palaces — reminders of the regal past. Bijapur’s monuments are a must visit during a tour of the city. 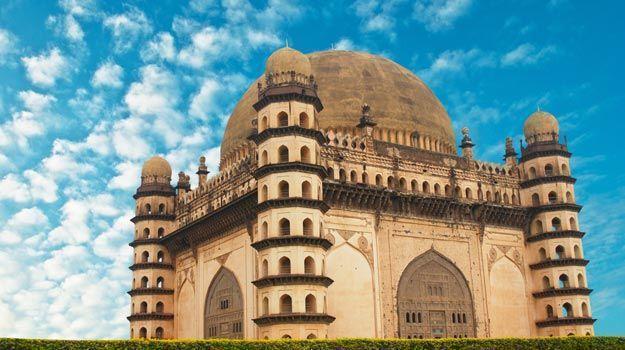 Gol Gumbaz, which has one of the largest domes in the world, Jama Masjid, the largest mosque in the region and Ibrahim Rauza have to be seen to appreciate their beauty. Other attractions are Gagan Mahal, Upri Burj, Chand Bawdi and the numerous gardens in the area. Malik-e-Maidan, the largest cannon in the world during medieval times, is a must visit too!

Bijapur was annexed by Aurangzeb in 1686, putting an end to the Adil Shah rule. It later fell in the hands of the Marathas and subsequently went to the British.

BEST PLACES TO STAY IN BIJAPUR

BEST PLACES TO EAT IN BIJAPUR

Restaurants in Bijapur offer an eclectic mix of Hyderabadi, Mughlai, South Indian and Chinese cuisines and both, vegetarian and non-vegetarian, options.


Place to visit in BIJAPUR

All Tombs Historical
View all places to visit in BIJAPUR

View all articles about BIJAPUR