Cherrapunji in Meghalaya is one of the wettest places on the planet and the only place in India to receive rain throughout the year. The town of Cherrapunji is nestled in the East Khasi Hills about 50 km southwest of the state’s capital, Shillong. Cherrapunji, also known as Sohra or Churra, means ‘the land of oranges’. The cliffs of Cherrapunji also offer stunning views of the plains of Bangladesh.

While the debate about the wettest place on earth is an ongoing one, Mawsynram, also in Meghalaya, is known to receive higher rainfall than Cherrapunji. Cherrapunji itself receives a staggering 11,777 mm of rainfall annually. Monsoon clouds which blow inland from the Bay of Bengal are stopped from moving further by the ridges of Cherrapunji. The town receives both south-west and north-east monsoon. Despite receiving excess rain, the town faces acute water shortage and the locals have to travel great distances to get fresh water. The relentless rain causes soil erosion which has denuded the land of Cherrapunji and the surrounding valleys.

Cherrapunji is famous for its living root bridges, a result of bio-engineering practiced by the locals. The bridges can bear 50 people at a time and are spectacular to watch (though the one-of-its-kind double-decker root bridge requires at least a few hours of trekking). ALSO READ These 9 places in India will let you fulfill your dream of touching clouds! 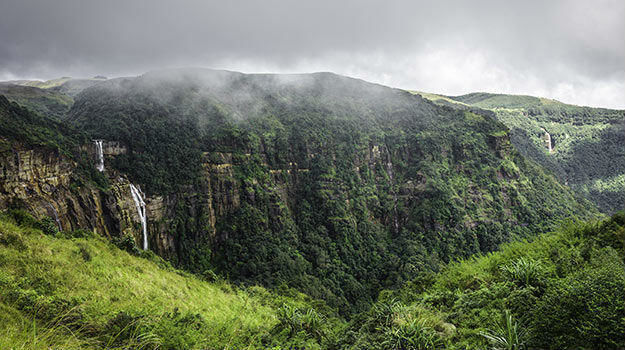 Cherrapunji in general is a good place for trekking. The most popular trekking route is the one that leads to the Double Decker Living Root bridge in Nongriat village. It is advisable to hire a guide for your treks.

Other activities you can do in Cherrapunji are river canyoning from Nongthymmai to Mynteng steel rope bridge, rock climbing and camping.

BEST PLACES TO STAY IN CHERRAPUNJI

Cherrapunji offers several options for accommodation. From guest houses with basic amenities, resorts that offer better facilities, cottages, to homestays… you will be spoilt for choice.

BEST PLACES TO EAT IN CHERRAPUNJI

Pork rice is a Khasi specialty that must be sampled in Cherrapunji. Eateries that sell pork and other red meat abound in the town. Sohra Pulao which is rice cooked with oil and vegetables but without spices should not be missed.

Cherrapunji also serves the typical fare that influenced by north Indian and Assamese flavors since it hosts several tourists from Guwahati and Delhi.


Place to visit in CHERRAPUNJI

THINGS TO DO IN CHERRAPUNJI

All Shopping
View all things to do in CHERRAPUNJI

View all articles about CHERRAPUNJI

Things to Do in cherrapunji