Situated about 193 km north of Mumbai, Daman has become synonymous with blue sea, rustic beaches, picturesque villages and relics from its Portuguese past. It lies sandwiched between Gujarat and Maharashtra. Daman was a Portuguese territory for over 300 years and was liberated in 1961 along with Dadra and Nagar Haveli, Goa and Diu. It lies on the banks of the Daman Ganga River.

The Shah of Gujarat ceded Daman and its surrounding regions to the Portuguese in 1539 and it remained an important outpost of opium trade to China for as long as the Portuguese remained a potent naval power. Resistance to Portuguese control flared up after India won independence from the British and in 1961, the Portuguese withdrew from their enclaves.

Since then Daman has been a union territory of India, though the influence of the Portuguese is evident in its architecture, way of life and food habits. People belonging to European, African and Indian origin have settled in Daman. The influence of these diverse cultures is evident in the dance, food and music of Daman. Different dance forms, like the Verdigao, Vira and Mando show strong Portuguese influence. Garba too has made its way across the Gujarat border into Daman. ALSO SEE Here are 5 beaches of Diu you must visit!

Daman is popular with locals in neighboring Gujarat who head to this beach destination to satiate their thirst for alcohol since it is a dry state.

BEST PLACES TO STAY IN DAMAN

Daman also boasts of luxury hotels. There are a few resorts that offer cottages on Devka beach which offer a view of the sea. The resorts have clean rooms and most even offer swimming pool, room service, parking space, access to bar and restaurant. There are a couple of resorts near the Coastal Highway that offer the same amenities.

BEST PLACES TO EAT IN DAMAN

Daman is famous for its seafood, vegetarian dishes and alcohol. As alcohol is legal in Daman, one can opt for any liquor and enjoy food with close ones. You can find quite a few restaurants serving delicious food here. One can also opt for stalls in the vicinity serving mouthwatering food.

Also a former Portuguese colony, Diu is popular for its history, architecture and culture and part of the Union Territory of Daman and Diu. The popular misconception about Diu is that it is Daman’s neighbor whereas it is over 600 km away!

Diu was an important trading post of the Portuguese during colonial times. Located at the southern tip of the Saurashtra peninsula of Gujarat, Diu is a 38.8 sq m island that has been ruled over by the Mauryans, Guptas and Mughals but it was the Portuguese who ruled over it the longest — for more than 400 years. Among the Portuguese structures, Diu Fort is the main attraction of Diu. It was built by the Portuguese Governor Nuno De Cunha between 1535 and 1541 AD. Other Portuguese structures on the island are the St Paul’s Church, Church of St Francis of Assisi and the St Thomas Church. 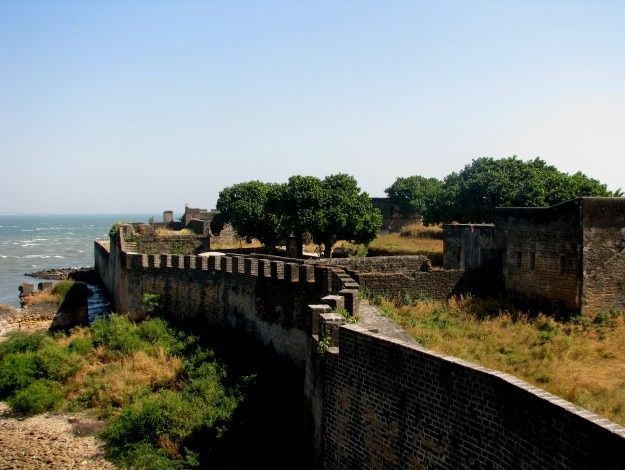 The 21 km shoreline of the island comprises three beaches — Nagoa, Ghoghla and Jallandhar. All three beaches have escaped commercialization and are ideal places to unwind. On the Nagoa and Ghoghla beach, one can enjoy water sports activities like water scooter and parasailing. Evening boat cruises are another attraction on the beaches. Hoka trees which were introduced by the Portuguese from Africa, are a popular tourist attraction here.

The culture of Diu is unique as it is a blend of Kathiawadi (Saurashtra) and Portuguese culture. Hindu, Islam and Christianity prevail on the island. Gujarati, Hindi, English and Portuguese are spoken by the locals. To promote tourism, the administration of Diu conducts the Diu Festival annually on December 19th, the Liberation Day of Diu.

BEST PLACES TO STAY IN DIU

BEST TO EAT IN DIU


PHOTOS OF DAMAN AND DIU

Place to visit in DAMAN AND DIU

THINGS TO DO IN DAMAN AND DIU

All Shopping
View all things to do in DAMAN AND DIU

Articles About DAMAN AND DIU

View all articles about DAMAN AND DIU

Things to Do in daman-and-diu