Delhi National Capital Region or NCR includes New Delhi and the urban areas surrounding it in neighboring states of Haryana, Uttar Pradesh and Rajasthan. Delhi NCR is India’s largest agglomeration (or town area) and one of the world’s largest with a population of over 47,000,000 according to the 2011 Census. It contributes 7.5 per cent to India’s GDP.

A seat of power for centuries, Delhi has seen numerous upheavals and has been destroyed and rebuilt on numerous occasions. Like every major Indian city, Delhi too straddles two worlds: the old constantly attempting to come to terms with the new. Old Delhi, once the capital of Mughal India, is a labyrinth of narrow lanes lined with crumbling havelis and formidable mosques. In contrast, the imperial city of New Delhi build by the British comprises spacious, tree-lined avenues and imposing government buildings. 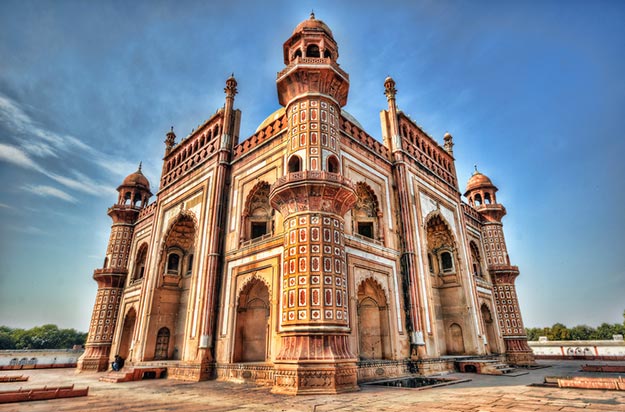 The city’s importance lies not just in its past glory as the seat of empires and magnificent monuments, but also in the rich and diverse cultures. In Delhi, you will discover that the city is sprinkled with dazzling gems: captivating ancient monuments dot every other corner, fascinating museums and art galleries contribute to a thriving cultural scene and fabulous eateries and bustling markets round off a wholesome tourist experience.

While Delhi is known for its Mughlai food, thanks to a thriving food scene Delhi offers everything from Continental and Thai, to Mexican and Chinese and more. The Mughlai influence on the food is apparent and enjoyed by both the locals and tourists. One of the most prominent contributions of the Mughals was the tandoor which has resulted in a large variety of tandoori dishes available. Some of the popular tandoori dishes in New Delhi include paneer tikka, tandoori chicken, seekh and boti kebab and even tandoori fish.

One can taste various desi foods available at every nook and corner of the city. Bengali market near Connaught Place in the center of Delhi is worth visiting to taste the wide variety of food items available. Delhi Haat has food stalls from almost every state in India, which offer cheap and quality food. Parathe Wali Gali and Chandni Chowk are the places where a foodie can spend his or her entire day.

Chinese food has also become very popular over the years which is why Delhi has a large number of Chinese restaurant and not to mention the road side fast food with delicious Chinese food. Continental cuisines can be had at multi-cuisine restaurants within the city or five star hotels.

Place to visit in DELHI NCR

THINGS TO DO IN DELHI NCR

View all articles about DELHI NCR

Things to Do in delhi-ncr