A major trading centre since medieval times, Dharchula is a beautiful town located on the Indo-Nepal border in the Pithoragarh district of Uttarakhand. The snow clad Panchchuli peaks located on the west of Dharchula separate it from the Johar Valley.

Situated at an elevation of 915 m above sea level, Dharchula is surrounded by hills and offers breathtaking views of the grand Himalayan peaks. The hill station gets its name from ‘Dhar’ and ‘Chula’; Dhar means peak and chula means stove in Hindi. The name was given to Dharchula as it resembles a stove.

Dharchula was an ancient trading town on the Trans-Himalayan trade routes. Trade was based on barter system and was the only source of income for the inhabitants of Dharchula. Local handicrafts like carpets which are known here as ‘dan’, were exchanged with the Tibetans for food and clothing. 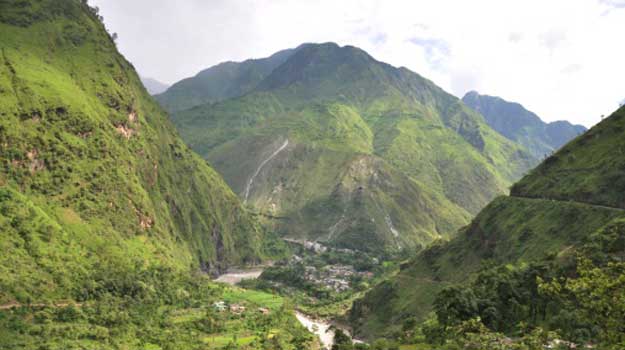 After the Indo-China War in 1962, all trading ties with the Tibetans came to a stop which caused innumerable hardships to the people of Dharchula. The difficulty forced people to look for alternate means of earnings. Soon the locals engaged themselves in farming, small businesses and cattle farming. With government intervention, good tourism facilities have developed in the town.

Dharchula is considered strategically sensitive as it is situated on the Indo-Nepal border and separated from its Nepalese twin by the River Kali. Dharchula shares its borders with both Nepal and China. Visiting the Nepali town of Dharchula makes for one of the best excursions. DO READ 5 Reasons to Visit Valley of Flowers in Uttarakhand This Summer

The people of both towns have common traditions, culture, and lifestyle and are allowed to move across the border without any strict checking of the passport or visa, but there is a customs checkpoint for large goods. Kumaoni and Dotiyali languages are spoken in the town.

Dharchula is inhabited by the people of Rung tribe famous for their dynamism, culture attachment and resilience. The hill station is an important camp on the Kailash-Mansarovar, Chotta Kailash and Narayan Ashram route. The town after Dharchula, Tawaghat, is where the trek to most of the yatras begin.

Culturally, Dharchula has huge significance as it is the meeting ground of the Shauka, Nepalese and Kumaoni during the Jauljibi International Mela. The fair is held every year in November at the confluence of the Kali and Gori rivers near Dharchula.

The best time to visit Dharchula is between the months of March and June and again between September and December. Summers are pleasant, whereas the winters are cold and blessed with snowfall.

The climatic conditions have allowed the vegetation of the region to thrive. Trees of oak, pine, apple and deodar are common. Wild animals like leopards, bears, foxes, monkeys and deer make up the animal kingdom of the region.

BEST PLACES TO STAY IN DHARCHULA

There are many accommodation options including rest-houses and budget hotels in Dharchula. The Kumaon Mandal Vikas Nigam (KMVN) rest house offers good facilities.

BEST PLACES TO EAT IN DHARCHULA

Eating options are limited in Dharchula. The only options are available at the in-house restaurants of the hotels and a few dhabas.


Place to visit in DHARCHULA

View all articles about DHARCHULA