Constructed by Emperor Akbar as part of his plans to build a grand capital for his empire, the World Heritage Site of Fatehpur Sikri is 39 km away from Agra in Uttar Pradesh. Fatehpur Sikri served as the Mughal capital from 1571 to 1585. Spread across eight sq km, the city is about three miles long and one mile wide. Built with red Sikri sandstone, the city’s architecture is a blend of Islamic and Hindu styles. The sandstone throughout the city has exquisite ornamental carvings and interlaced decorative designs.

Akbar, who longed for an heir, was assured of sons by the Sufi mystic Salim Chishti. When the son was born, Akbar named him Salim in honor of the Sufi saint. Salim later came to be known as Jahangir after he ascended the throne. Following his military victories in Rajasthan, Akbar decided to build a new capital and chose Sikri village, where the Sufi saint used to live. The city was christened Fatehabad, Fateh meaning victory. It later came to be known as Fatehpur Sikri. ALSO SEE Best Things to do in Fatehpur Sikri, the Mughal Capital Founded by Emperor Akbar 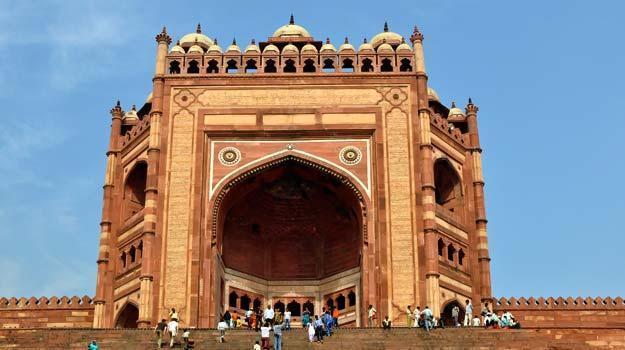 The planning and construction of the walled city took 15 years. Akbar took great interest in its planning and building. Planned on Persian principles, Akbar tried to revive the glory of old Persian courts. The architecture is a mix of Indian architectural styles especially Gujarati and Bengali styles as skilled craftsmen from different regions were employed for the construction of the city.

Fatehpur Sikri had royal palaces, halls for public and private audience, the zenana or the quarters for women, courtyards and grand avenues. Jama Masjid or the grand mosque was the first structure to be constructed with the rest of the city built around it. The aristocrats had residences on a higher plane than the commoners. Buland Darwaza, Panch Mahal, Diwan-I-Aam, Diwan-I-Khaas, Sheikh Salim Chishti tomb and Birbal Bhavan are some of the must visited buildings in Fatehpur Sikri.

Besides its historical and architectural importance, Fatehpur Sikri was the place where the legends about Akbar’s Navratnas (or nine jewels, a reference to his nine ministers) took shape. The city remained Akbar’s capital for 14 years. It was abandoned in 1585 due to acute shortage of water in the region. Today, the city lies uninhabited but mostly intact.

Fatehpur Sikri railway station has the most number of budget hotels. A government guest house is located less than a km south of the city. The mid-range hotels are mainly clustered around the bus stand and on State Highway 45.

There are a few food stalls near the railway station that serve vegetarian and non-vegetarian food items. There is a railway food stall that serves North Indian cuisine. Carry food and water when visiting the monuments as there are no food stalls around.


Place to visit in FATEHPUR SIKRI

All Historical
View all places to visit in FATEHPUR SIKRI

View all articles about FATEHPUR SIKRI