Touted as one of its kind, the reserve we know as Jim Corbett National Park was established in 1936 and has the distinction of being India’s first national park. It is located in Uttarakhand and is accessible from Nainital, Delhi, Agra and Lucknow

The reserve inspired the India-wide Project Tiger started in 1973 for conservation of wild tigers and saw the creation of 22 other reserves. 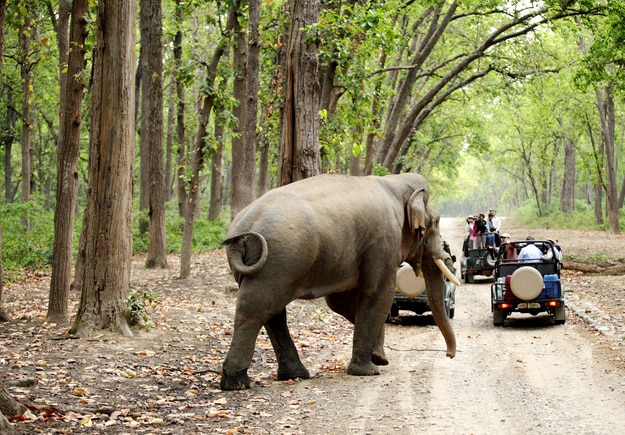 Most Safaris are scheduled between 6 am to 10 am and 2 pm and 5 pm. The best animal sightings happen in April and May when the animals venture out to the various watering holes. But do note that summers tend to get extremely hot here. If you’re not very high on sighting animals, consider visiting it between October and February. The park is shut during monsoons, staring (around) June-end for two months.

A lot of hotels and resorts are located close to Corbett.

The park is usually crowded during the peak season (which generally extends from October to February), so don’t forget to make reservations in advance.

Budget rooms are available at around Rs 1500 and provide reasonably comfortable accommodation.

The mid-range options start from Corbett Machaan for Rs 3600 per night for two people.

The Corbett Leela Vilas provides a luxurious stay for Rs 10,449 for two people per night.

There are several other options in between like the Tiger Camp, Infinity Resort, River View Retreat, Wood Castle, Pratiksha River Retreat and the Mapple Corbett.

Since all these options are available within the Jim Corbett Reserve premises, it gives you a chance being closer to wildlife.

Note that you can stay in the National Park for a minimum of one and maximum of  three nights only.

All restaurants inside the Jim Corbett National Park are in-house restaurants of the hotels, which serve a wide range of cuisines.

THINGS TO DO IN JIM CORBETT NATIONAL PARK

Things to Do in jim-corbett-national-park