One of the largest cities in Rajasthan, Jodhpur is best-known for the majestic Mehrangarh Fort. Jodhpur is also known as the ‘Sun City’ thanks to the bright and sunny weather all year round and the ‘Blue City’ because of the large cluster of houses painted in blue around the fort. Jodhpur, which was previously known as Marwar, was founded in 1459 by Rao Jodha, a Rajput chief of the Rathore clan.

The city was located on the planned road linking Delhi to Gujarat which enabled it to profit from a prosperous trade in opium, copper, silk, sandals, dates and coffee. Under the rule of Maharaja Umed Singh, Jodhpur grew into an excellent modern city. During the rule of the British, Jodhpur went on to become the largest city in Rajputana. It thrived under the British; its merchants, the Marwaris, prospered and came to occupy a leading position in trade all over India. 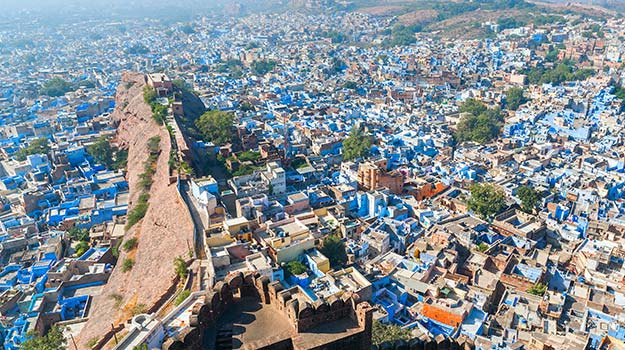 In 1947, India became independent and the state merged into the union of India. The people of Jodhpur are warm and welcoming. The elegant palaces and  temples around the city carry the remarkable splendor of this city. Adding to the glamour of Jodhpur, are its stunning handicrafts, folk dances, folk songs and also the brightly dressed people. The enthusiasm during the famous Marwar festival is infectious. ALSO SEE 5 Reasons to Visit India’s Blue City This Winter

The bazaars of Jodhpur are a treasure trove of tie-and-dye textiles, embroidered leather shoes, lacquer-ware, antiques, carpets and puppets to the attractive Rajasthani textiles, clay figurines and classic silver jewelry.

India Tailors, along the High Court Road (just a few paces off Nai Sadak) is one of the best places in the city to get yourself an immaculately tailored Jodhpur jacket (If your stay isn’t very long, they will be happy to courier it to you.)

BEST PLACES TO STAY IN JODHPUR

Jodhpur has a number of hotels and guest houses for the accommodation of vacationers and travelers.Whether you’re seeking extravagant or budget accommodation. These hotels are well-equipped with contemporary and luxury amenities. Staying at heritage hotels is also a good option if you want to pamper yourself with lavishness and luxury.

BEST PLACES TO EAT IN JODHPUR

Nai Sarak (or New Street) that leads to the clock tower and the main market is the center of all activity in Jodhpur. Sample ghevar, the Rajasthani delicacy (or its far richer and tastier version the malai ghevar) and pyaaz ki kachori (or onion kachori) at the famous Janata Sweets or eat (yes, eat) the thick Makhaniya Lassi at Mishralal Hotel just around the corner from the clock tower.

Indique, the open-to-air hotel at Pal Haveli across the road from Mishralal’s serves the most delicious laal maas (or red meat), which will be a well-deserved treat after a long, long walk at Mehrangarh.

The average minimum and maximum temperature of Jodhpur is as given below. The best time to visit Jodhpur is also specified.


Place to visit in JODHPUR

THINGS TO DO IN JODHPUR

All Shopping Adventure Events
View all things to do in JODHPUR

View all articles about JODHPUR

Things to Do in jodhpur