This historic town of Kumbhalgarh is located about 85 km from Udaipur in Rajsamand district of Rajasthan. Kumbhalgarh is famous for its magnificent monuments, royal chhatris and glorious palaces. The Kumbhalgarh Fort with its intricately carved temples and superb artistry is one of the strongest fortresses in the country. The Kumbhalgarh Wildlife Sanctuary is popular with wildlife aficionados and birdwatchers.

Once the seat of Prince Samprati, during the 2nd century, Kumbhalgarh was the birthplace of Mewar’s legendary king, Maharana Pratap. Kumbhalgarh’s most important ruler, however, was Rana Kumbha who is credited with having designed 32 out of the 84 fortress that protected Mewar. The town is said to have been a safe haven for Mewar’s rulers during times of conflict; Prince Udai, for instance, was smuggled out of Chittor in 1535, when it was Mughals laid siege to the city. The prince later became the king and founded Udaipur. DO READ Kumbhalgarh Fort Photos Show Why You Must Visit The Second Largest Fort in India Soon 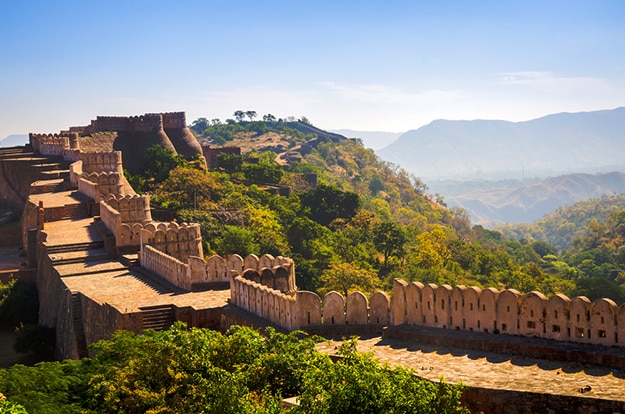 Located at the foothills of pebbly mountains, the city is filled tales of valor and heroism of the legendary Rana Kumbha. Kumbhalgarh Fort has a fort within itself. CHECK OUT 22 of India’s most beautiful monuments that make us proud to be Indians

Kartargarh, the inner fort, has a palace built by Maharana Fateh Singh after he had pulled down the old palace built by Rana Kumbha. The thick wall encompassing the fort stretches around 36 km and is wide enough to take eight horses abreast. The fort’s large compound is strewn with ancient ruins and walking around it can give you a glimpse of a different era altogether. The Kumbhalgarh fort is now open to the general public as a museum and is spectacularly lit for some time each evening.

BEST PLACES TO STAY IN KUMBHALGARH

Kumbhalgarh is one of the most sought-after tourist places all year round, so prior booking would be advised. The climate of Kumbhalgarh is tropical with the mercury climbing up to 42 degrees Celsius during summers, hence, all hotels in the town have air conditioning.

A room in a budget hotel costs around Rs 600. Double rooms in heritage hotels start from Rs 3,000. Some resorts located near the wildlife park are a real treat for wildlife enthusiasts. The rooms here are well furnished and are equipped with centralized air conditioning.

BEST PLACES TO EAT IN KUMBHALGARH


Place to visit in KUMBHALGARH

THINGS TO DO IN KUMBHALGARH

All Adventure
View all things to do in KUMBHALGARH

View all articles about KUMBHALGARH

Things to Do in kumbhalgarh