India is home to a number of sacred temples and monuments. Most of these monuments are prime tourist attractions that are visited by thousands of devotees. One such popular and significant Buddhist monument is Deekshabhoomi. A prime attraction in the city of Nagpur, Deekshabhoomi is located at the spot where the architect of the Indian Constitution, Dr. Babasaheb Ambedkar, converted to Buddhism on October 14, 1956. It was a historic and auspicious day as 600,000 people followed Dr. Ambedkar in the conversion to Buddhism. The literal meaning of ‘Deekshabhoomi’ is the ground where people got ordained as Buddhists. Dr. Ambedkar said he chose Nagpur for his conversion to Buddhism as it was the land of the ‘Nag’ people who supported Buddhism in its early days. The day he chose was the day of Ashoka Vijaya Dashmi, the day emperor Ashoka had converted to Buddhism. 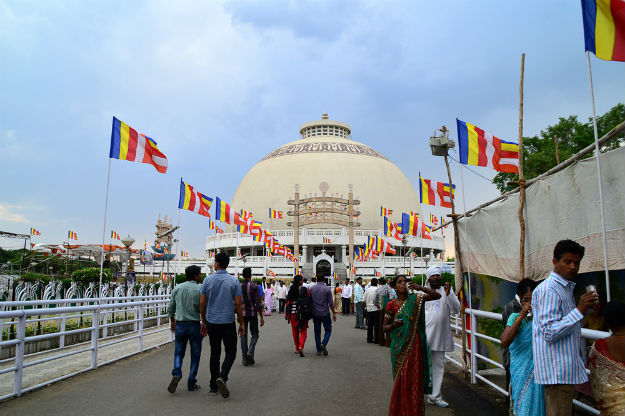 Deekshabhoomi is one of the major Buddhist pilgrim centres in India. Its construction started in 1968 over four acres with quarters for monks. The stupa was built in 1978 and has been revered as a major Buddhist site since. It is the largest stupa in Asia and the largest hollow stupa in the world. The construction of the stupa is remarkable as it consists of a hemispherical two-storied building with each storey capable of housing 5000 monks. Its architectural splendour and historical significance make Deekhshabhoomi a prominent pilgrim center.

The average minimum and maximum temperature of Nagpur is as given below. The best time to visit Nagpur is also specified.