Largest Airports in The World: Where Does Noida (Jewar) International Airport Stand | Explained

Noida International Airport: The airport, which was first mooted in 2001 by the then CM Rajanth Singh is said to be Asia's biggest

The airport, which was first mooted in 2001 by the then CM Rajanth Singh is said to be Asia’s biggest. ” It will be Asia’s biggest airport and create employment opportunities for more than one lakh people. There were only two airports in Uttar Pradesh for the last 70 years but now Jewar airport will be the 10th airport to be built in the state in last seven years. Soon we will see 17 airports in the state. Previously, only 25 destinations were covered but now 80 destinations are covered’, Civil Aviation Minister Jyotiraditya Scindia claimed.

The airport will have a capacity of 12 million passengers per annum (in the first phase) and will commence construction of its second phase by 2031-32.  A total of 1,324 hectares have been acquired for the project in the first phase, and two runways will come up in the first phase. According to civil aviation ministry officials, flight operations are expected to commence from the greenfield airport by 2024.

Once inaugurated, Noida International Airport will be listed among the world’s largest airports. Compared with the King Fahd Airport, the world’s biggest airport by size, Noida international airport property covers about 51 square kilometers.

However, in terms of the number of runways, only the Chicago–O’Hare and the Dallas/Fort Worth are larger, with eight and seven runways respectively. Other existing airports with six runways are Amsterdam, Detroit, Boston, and Denver.

With six runways once all its expansions are completed, NIA will be India’s largest airport and among the world’s largest airports. As of September 2019,  the Indira Gandhi International Airport, with three runways, has the highest number of runways of any airport in the country. 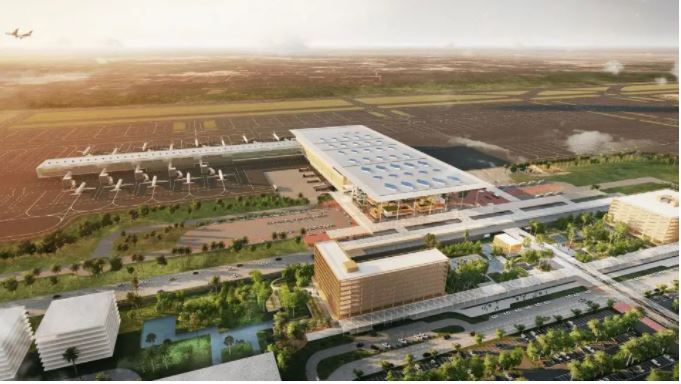