Uttar Pradesh is India’s most populous state and inarguably most crucial, politically.

New Delhi: The The Election Commission of India has announced the dates for Uttar Pradesh Assembly polls 2022. The politically crucial state will go to polls in seven phases starting February 10. Counting of votes will be held on 10th March, Thursday, the EC said.

Take a look at phase-wise polling schedule for UP Elections 2022 here: 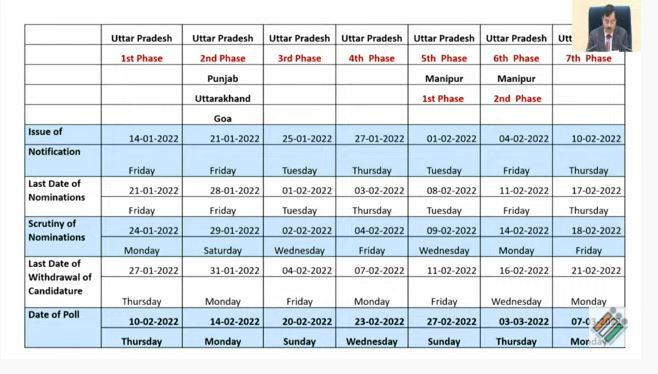 Uttar Pradesh is India’s most populous state and inarguably most crucial, politically. With a population over 200 million cutting across caste and communities, and 80 Lok Sabha seats and 403 assembly seats, the state wields disproportionate power in the country’s politics. Having roots in the state propels a political party or leader to the national arena because no other state comes close in terms of political heft.

Full phase-wise list in which various UP districts will vote:

Last month the Allahabad High Court in UP had asked the Election Commission and Prime Minister Narendra Modi to defer polls by a couple of months in light of the Omicron threat.