Zee News Opinion Poll: The Bharatiya Janata Party (BJP) is all set to retain power in UP with 250+ seats in 403 member assembly. Incumbent CM and BJP's firebrand leader Yogi Adityanath is projected to lead the race of CM post with nearly 47% of participants favoring him.

New Delhi: In Zee News Opinion Poll, the Yogi Adityanath-led Bharatiya Janata Party (BJP) is likely to storm back to power by winning 245-267 seats in 403 member assembly but may face stiff competition from the Samajwadi Party (SP). In terms of the most popular choice for the chief minister’s post, incumbent CM and BJP’s firebrand leader Yogi Adityanath continues to lead the race with nearly 47% of participants favoring him. Former chief ministers Akhilesh Yadav and Mayawati were in second and third positions respectively with 35% and 9% support.Also Read - Zee Opinion Poll For Uttarakhand Elections 2022: How is Caste Dynamics Likely to Sway Voting Decision?

Reacting to the projections of the Opinion Poll, Uttar Pradesh Deputy Chief Minister Dinesh Sharma asserted that BJP will get an absolute majority by bagging more than 300 seats. However, SP, BSP, and Congress together will fail to grab even 100 seats in the forthcoming polls.  “Samajwadi Party 2 digit bhi nahi paar kar payegi. (Samajwadi party won’t be able to cross 2 digits in the Vidhan Sabha chunav)”, Sharma told Zee News. Of all the states, elections in Uttar Pradesh are keenly observed by the poll pundits as it is considered as a major mood assessor for the country’s General Elections which would be conducted in 2024.

Take a look at the key findings below:-

As per Zee News-DesignBoxed Opinion Poll, the Bharatiya Janata Party is expected to form government in Uttar Pradesh by winning 245-267 seats in the 403 member Assembly. While the Samajwadi Party is expected to win 125-148 seats, the Congress and BSP are projected to get only 3 to 7 and 2 to 6 seats, respectively in the upcoming polls.

In Uttar Pradesh, a majority of the respondents nearly 47% participants want Yogi Adityanath to head the next government. SP’s Akhilesh Yadav and BSP’s Mayawati were in second and third position with 35% and 9% respectively. Only 5% were in favour of Congress’ Priyanka Gandhi. 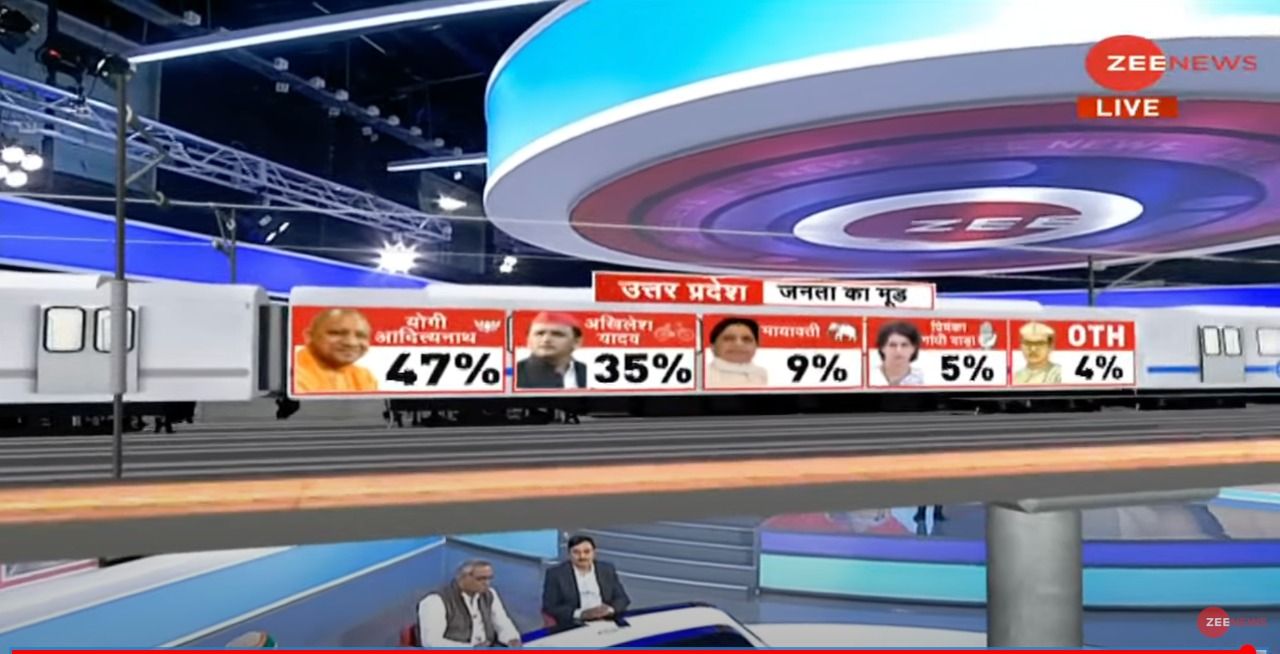 Overall Tally: BJP Set to Retain Power in UP

According to the Opinion Poll conducted by Zee News-DesignBoxed, the Bharatiya Janata Party is set to storm back to power in Uttar Pradesh with a 41% vote share. 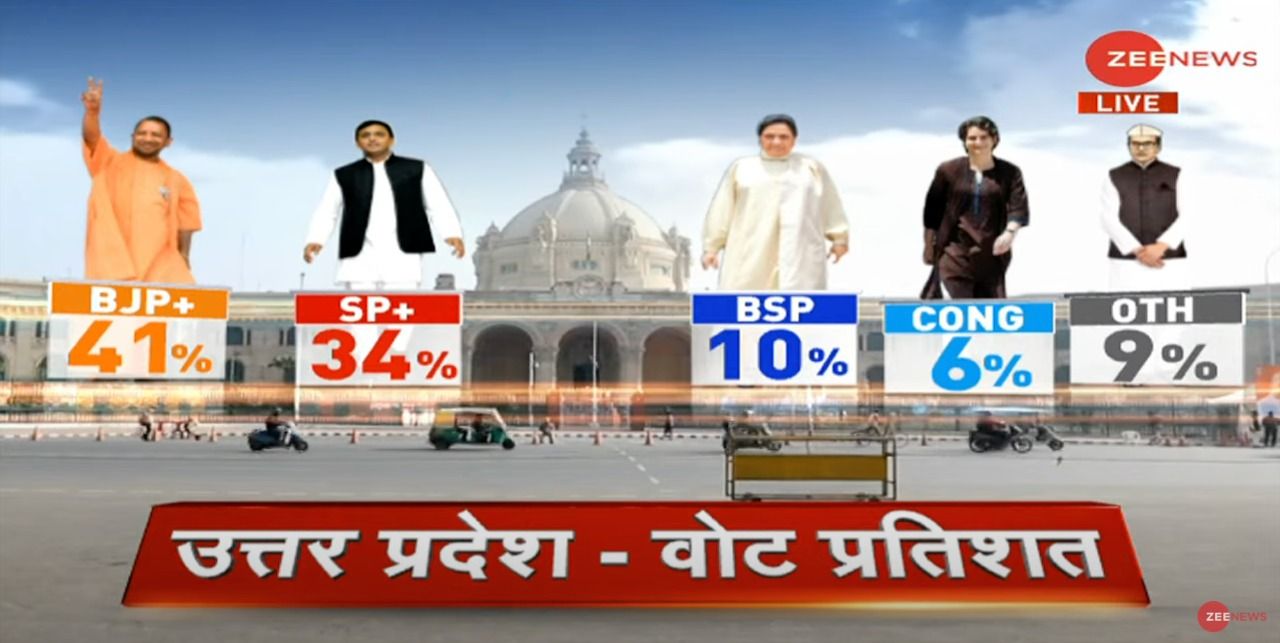 Yogi, Akhilesh Neck And Neck For CM Post in Western UP

For the chief ministerial post, Akhilesh Yadav may give a tough fight to incumbent CM Yogi Adityanath in Western Uttar Pradesh as 41% of respondents believe that the SP supremo can helm the position. Yogi Adityanath, on the other hand, remained the first choice with 43% of people extending their support to him. 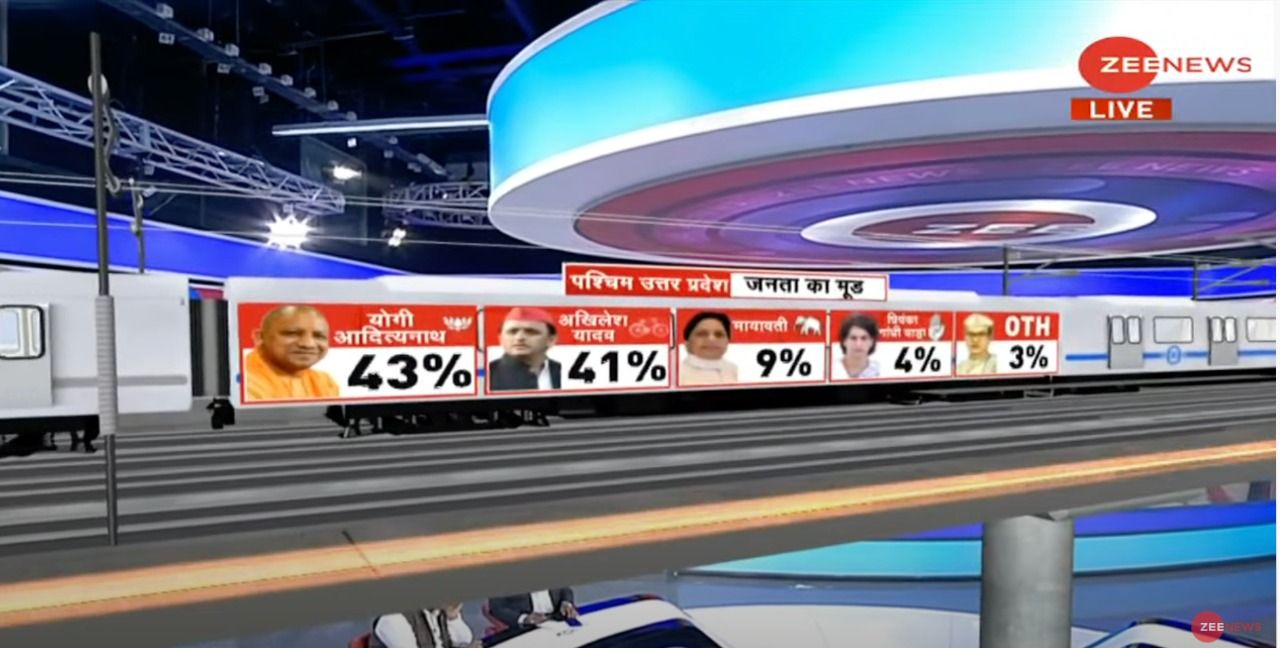 BJP Likely  to Get 32-37 Seats in Western Uttar Pradesh

In Western UP, both BJP and SP are likely to get 33-37 seats. BSP is expected to settle with 02-04 seats while Congress and Others may fail to open its account in Western UP.

In Central Uttar Pradesh, Chief Minister Yogi Adityanath leads the race of CM post with 47% of the voters supporting him, followed by SP’s Akhilesh Yadav who got the support of 35% of participants. BSP supremo Mayawati trails way behind with 9%. 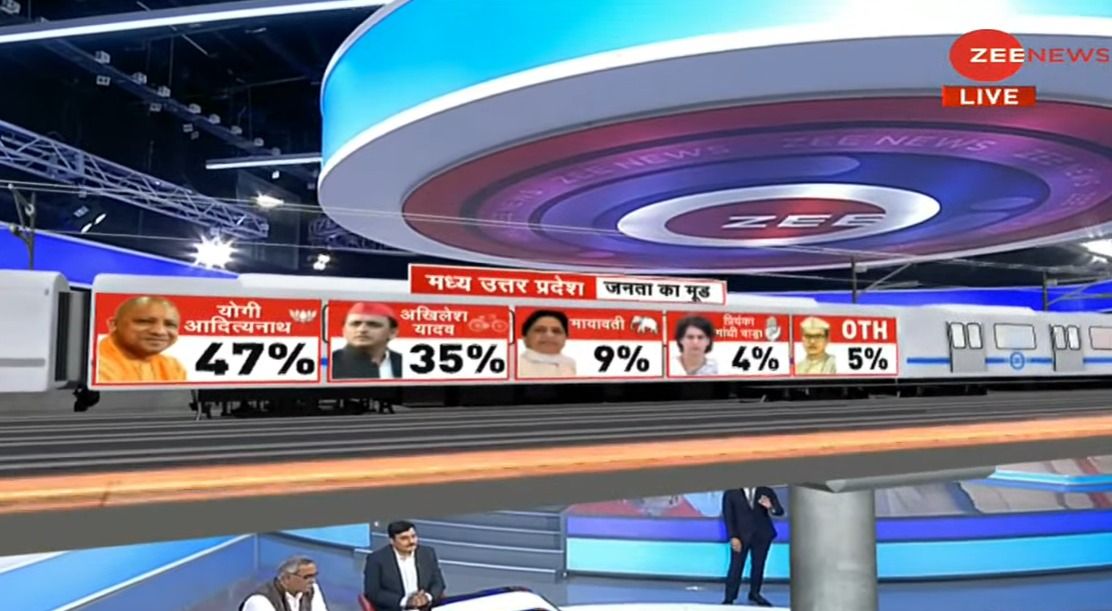 Zee Opinion Poll For Central UP

According to the Zee News-DesignBoxed opinion poll, Yogi Adityanath is the most popular CM choice with 47 per cent people supporting him while 34 per cent of participants want Akhilesh Yadav as the CM. BSP’s Mayawati and Congress’ Priyanka garnered support of only 10% and 5% people respectively. 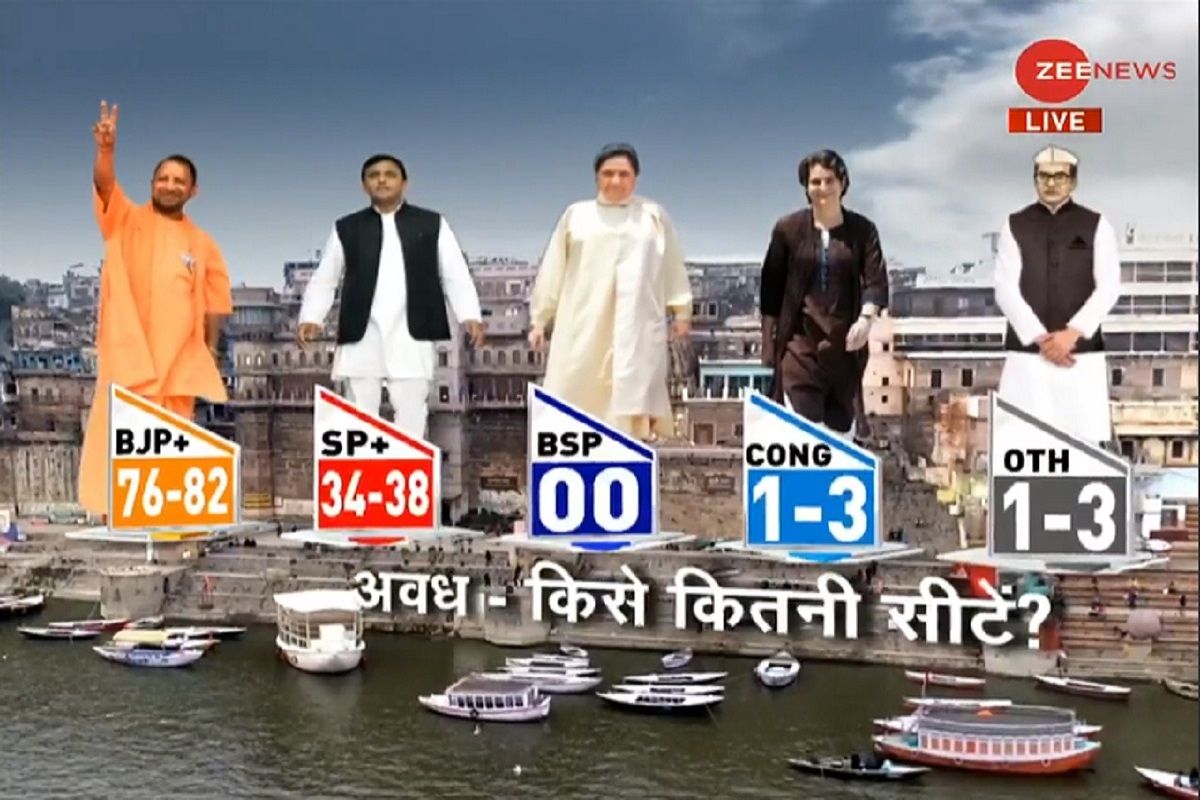 In the Awadh region, BJP is likely to get an absolute majority with 43% vote share, while Akhilesh Yadav’s Samajwadi Party is likely to gain momentum with 32% vote share. BSP, Congress, and others are expected to get 10%, 5% and 4% vote share. 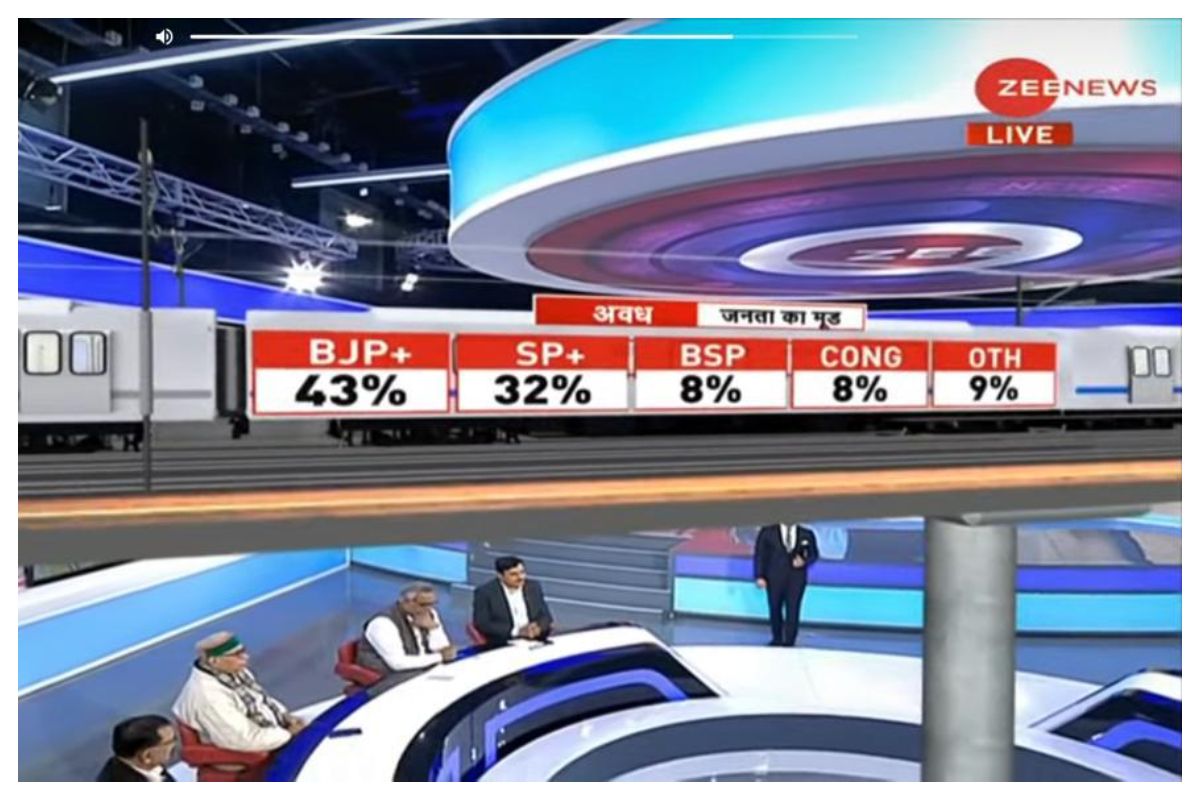 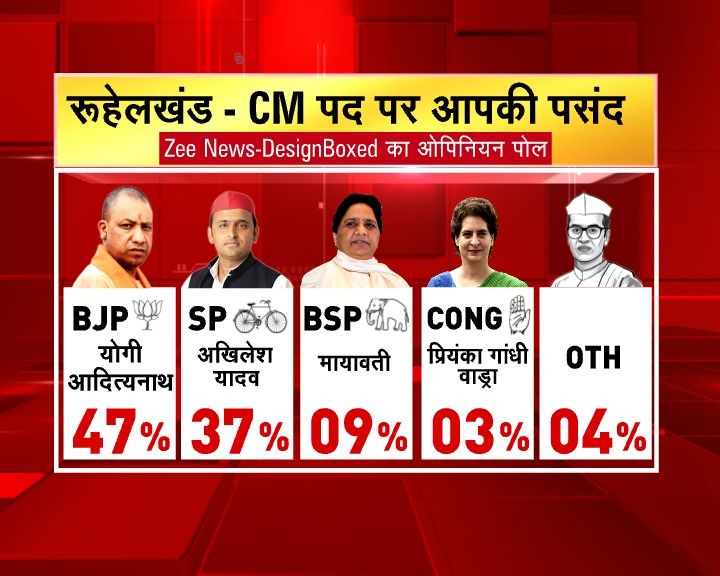 BJP Likely to Emerge as Single Largest Party in Rohilkhand

Out of 25 seats in Rohilkhand, the BJP is likely to be the single largest party with 19-21 seats. The SP is expected to secure 03-07 seats while Congress might fail to open its account in the region. 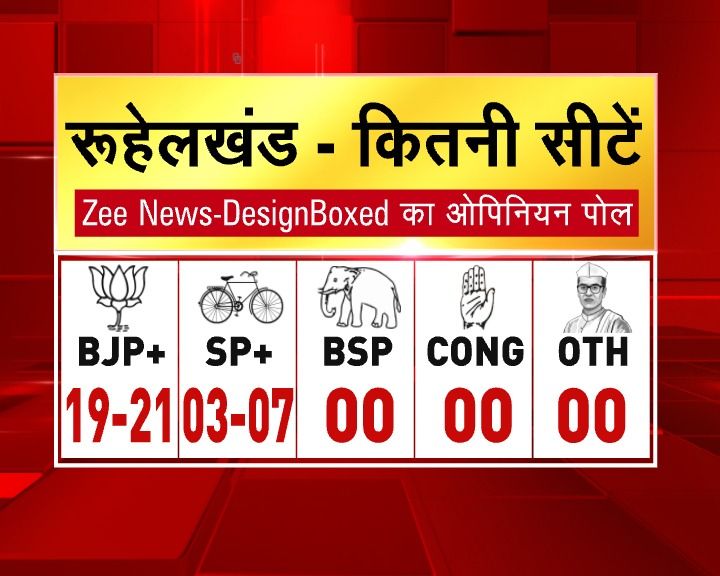 Of the total 19 seats in 7 districts of Bundelkhand, BJP is likely to bag 17-19 seats, SP-01.  The Congress and BSP will once again fail to get public support in the Bundelkhand region. 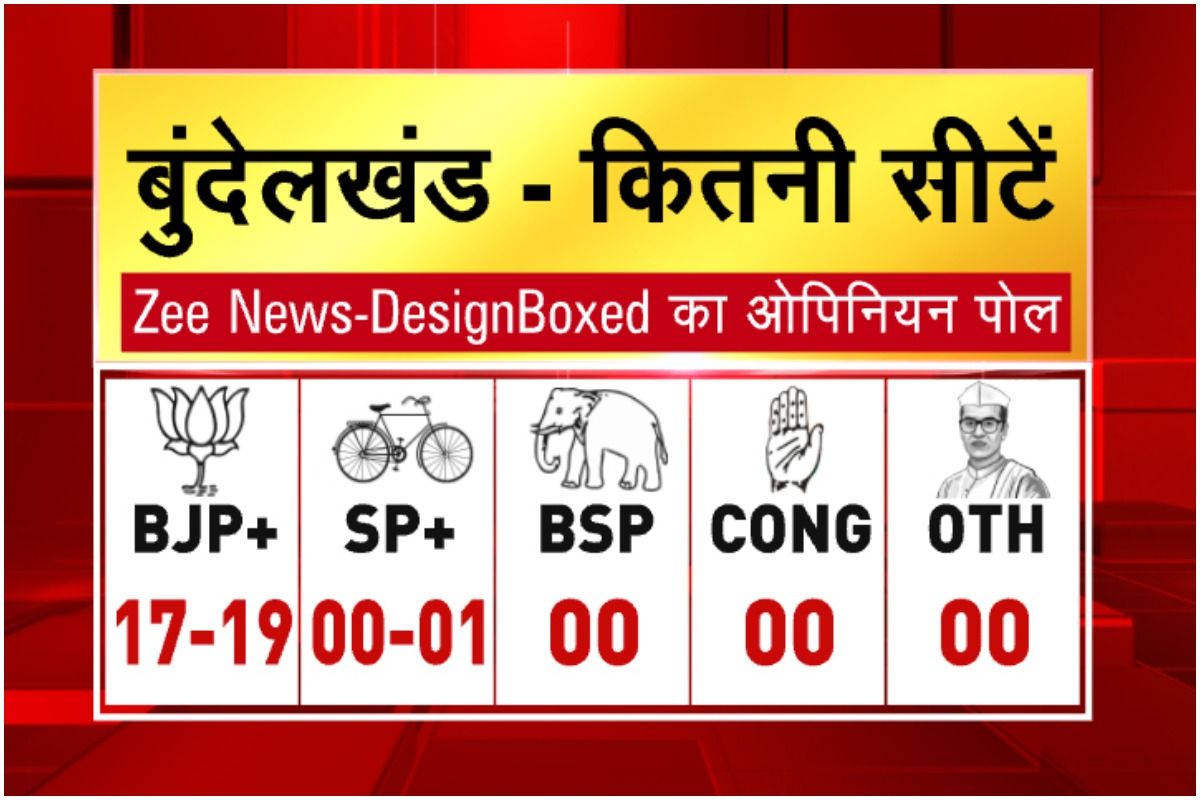 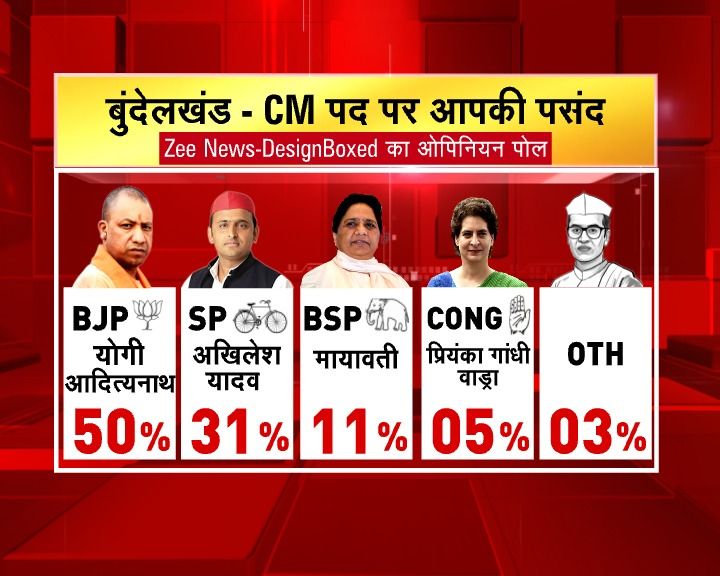 In Bundelkhand, BJP to Gain BIG With 13% Jump in Vote Share

In 2017, BJP had secured a 46% vote share, SP had settled at 16%. However, this time BJP is likely to gain big in the upcoming polls. As per Zee News-DesignBoxed, BJP is projected to get 59% vote share, a jump of 13 per cent from its 2017 share. Akhilesh Yadav’s Samajwadi Party is expected to get 21% vote share while Congress, BSP, and others are likely to settle at 10%, 5%, and 5% respectively. 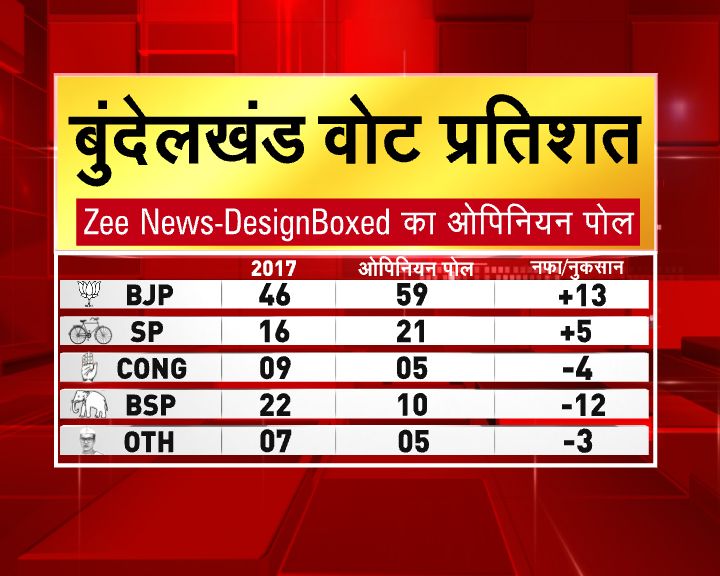 According to the Opinion Poll conducted by Zee News-DesignBoxed, the BJP is predicted to get 53-59 seats while Samajwadi Party is likely to bag 39-45 seats of the total 102 in Purvanchal. The BSP and Congress will win 02-05 and 01-02 seats respectively. 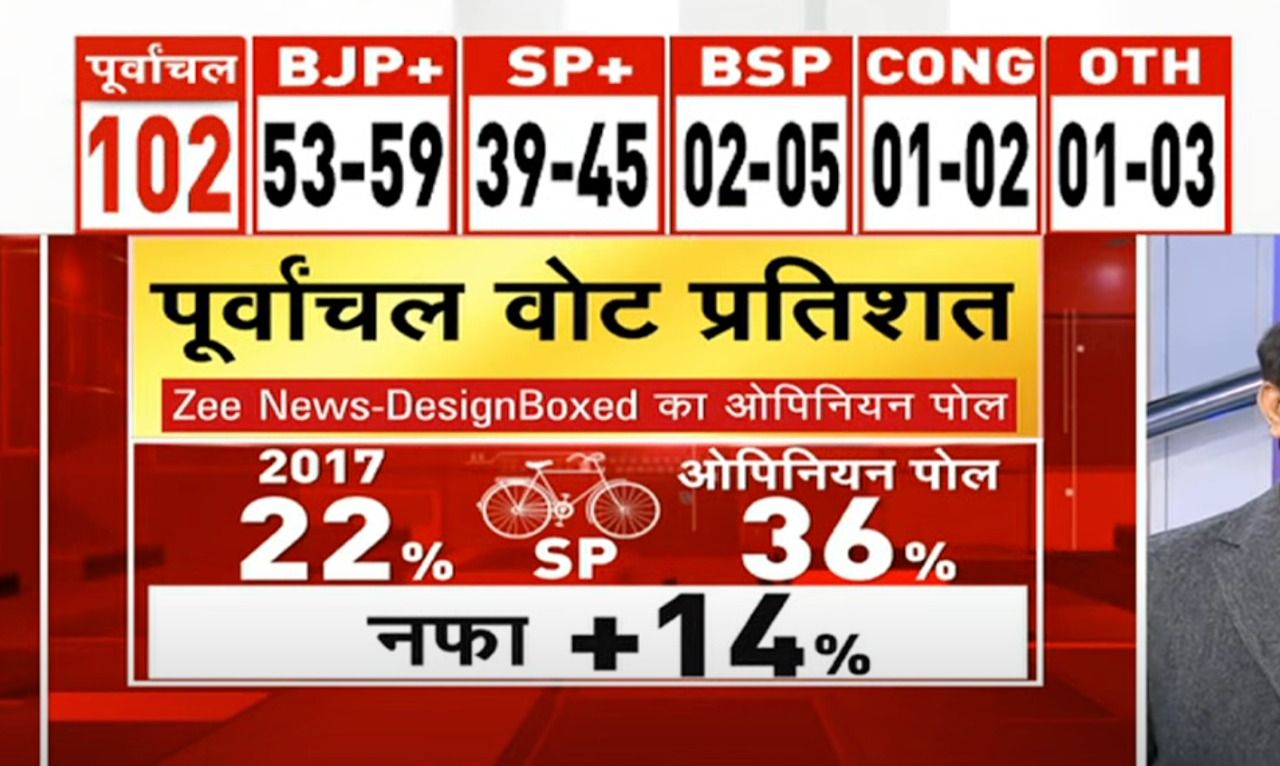 Most Preferred CM in Purvanchal

With a whopping 48% votes, incumbent CM Yogi Adityanath emerged as the favorite candidate for the top post, followed by Samajwadi Party chief Akhilesh Yadav with 35%. BSP chief Mayawati was at a distant third with 9% support. Congress leader Priyanka Gandhi Vadra has the support of only 4% of participants. 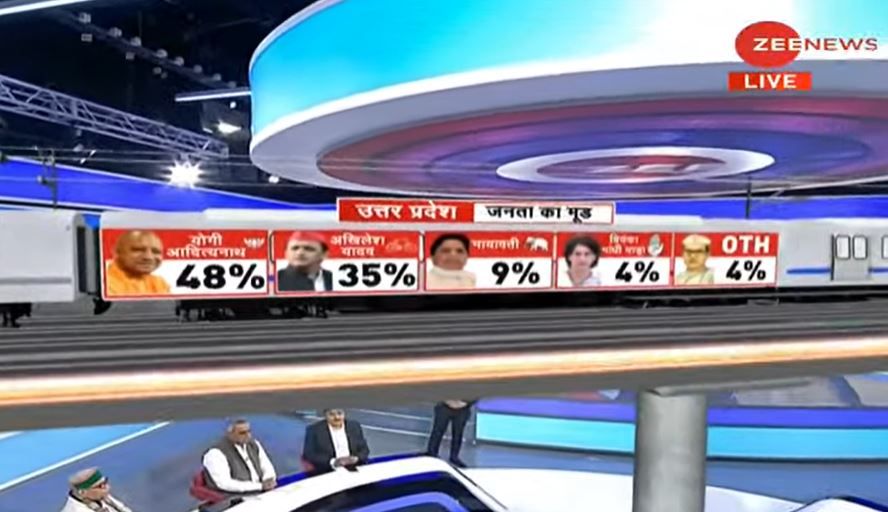 Zee News-DesignBoxed reached out to people across 403 seats of poll-bound Uttar Pradesh. The survey was done among randomly selected eligible adults and asked people about the most important issue and the factors that would help reach a decision. The opinion poll also asked people about their preferred choice for the Chief Minister and how caste dynamics swayed the voting decision. The Zee News-DesignBoxed would also emphasize that despite all precautions taken during the sample survey, a margin of +/-4% is always a possibility if we take into account the respondents’ deviation from the sample. Also, the numbers in the opinion poll are not the actual predictions but a projection based on a sample survey. This survey is the base for the Opinion poll and not actual results.