Have you caught any lie of Delhi CM Arvind Kejriwal yet? 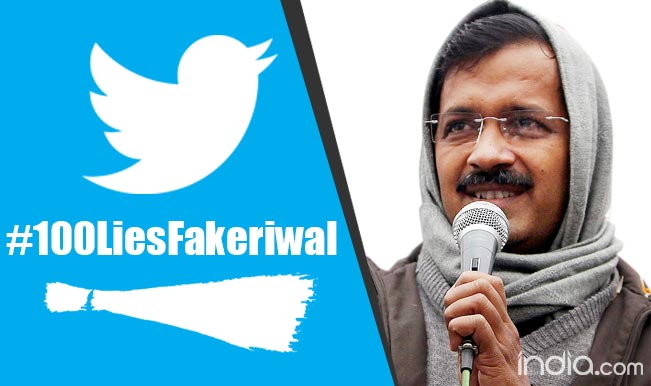 Also Read - Tandav: Scenes That Are at The Heart of Controversy

Delhi Chief Minister Arvind Kejriwal-led government in Delhi will complete its 100 days in office on May 24. A lot has been said about Aam Aadmi Party (AAP) since its inception and with the party completing its 100 days in power is a surprising tell-o-tale. Kejriwal’s infamous resignation in February 2014 after being 49 days in power drew severe criticism and there were talks that will this government resign again, with the amount of controversies it has dragged itself in, before and after winning the elections. Also Read - Couples Share Their Love Stories Through #WeMetOnTwitter, Singles Start Hilarious Meme-Fest

AAP saw itself being embroiled in lot of controversies, which saw its founder leaders Prashant Bhushan and Yogendra Yadav being ousted off the party. Kejriwal’s run-ins with Narendra Modi-led Centre government also drew flak from people on social media. The staged suicide attempt of businessman-farmer Gajendra Singh in presence of top AAP leaders was another low. Kumar Vishwas’ alleged affair with a Muslim volunteer in Amethi also came to the fray. However, with needless and endless controversies the party managed to stay afloat and will be completing 100 days in less than 24 hours. (Also read: Was Gajendra Singh’s death suicide or murder? 3 videos that expose Arvind Kejriwal and Aam Aadmi Party) Also Read - Tandav Controversy: Another FIR in Lucknow Against Ali Abbas Zafar And Others For 'Hurting Religious Sentiments'

People on social media have been abuzz with this accomplishment and #100liesfakeriwal have been the top trend on Twitter since the morning. We bring you to a list of 11 tweets which captures the mood of social media perfectly.

hey anna ji why u r hiding after creating monster @ArvindKejriwal . no dharna for delhi mess?? shame on you.. #100LiesFakeriwal — #Truthteller (@DrRakeshkr082) May 23, 2015

7. No Lokpal, only KEJRIWAL

AAP- led by founder-leader Arvind Kejriwal in Delhi Assembly Elections 2015 secured an historic mandate as the party won as many as 67 seats from the 70-seat Assembly. The Bharatiya Janata Party (BJP) under the leadership of former IPS officer Kiran Bedi could manage to win only 3 seats, whereas Indian National Congress (INC) under Ajay Maken’s leadership were virtually wiped out from the national capital.