18th SAARC Summit, Nepal 2014: Top 7 facts you would like to know about SAARC organisation

Starting on November 26, the two-day SAARC Summit will be the 18th session of the multilateral organisation which will be held in Kathmandu in Nepal. 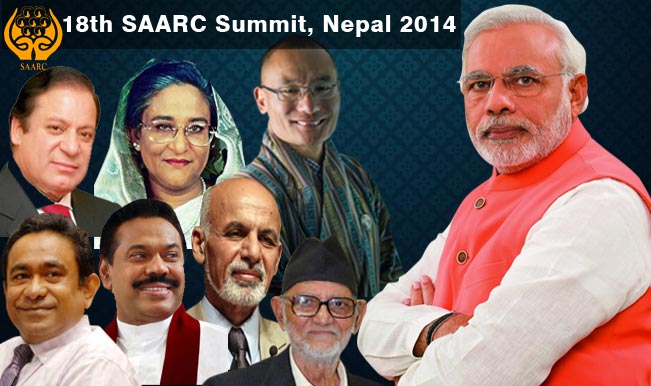 The South Asian Association for Regional Cooperation (SAARC) is a multination organisation that comprises eight countries located in South Asia. SAARC is an economic organisation of which Afghanistan, Bangladesh, Bhutan, India, Maldives, Nepal, Pakistan, and Sri Lanka are members. The SAARC was the talk of the town recently when Prime Minister Narendra Modi invited SAARC leaders to attend his swearing-in ceremony on May 26. The invitation was also extended to Pakistan to which its Prime Minister Nawaz Sharif readily accepted. India witnessed a historic ceremony as it was also dubbed to be a mini-SAARC Summit. Also Read - As India Boosts Security at LoC, Pakistan’s ISI Tells LeT and Hizbul chiefs to Push Militants into Valley

Starting on November 26, the two-day SAARC Summit will be the 18th session of the multilateral organisation. Nepal will be holding the 18th SAARC meet as the national capital Kathmandu is all set to host neighbouring South-Asian countries. The current session is abuzz with the news of India-Pakistan relations. Also Read - India Records Lowest COVID-19 Deaths in 3 Months; Total Tally Surpasses 7.5 Million | Key Points

There are several facts and figures which one would like to know about the South Asian association. We would like to bring some facts about SAARC Summit in the light which will aptly describe the work, significance and importance of it. Look at the list below:

1. The motto of the SAARC organisation is ‘Deeper Integration for Peace and Prosperity’.

2. It will surprise many but the official language of SAARC organisation is English.

3. The headquarters of the SAARC association is not in India or Pakistan, but it situated in Kathmandu, Nepal.

4. Not many know that if the Gross Domestic Product (PPP) of these eight nations is combined, it will be the third highest economy in the world, behind United States of America and China.

5. The idea to develop SAARC was first initiated in the year 1980 but it took five years to contemplate it. The first SAARC summit was held in the year 1985 on December 8 in Dhaka, Bangladesh.

6. Initially the SAARC organisation comprised of only seven countries. Afghanistan was later added as new full member of the association during the 13th SAARC Summit held in Dhaka in April 2007.

Not many know that when India was at war with Pakistan in Kargil, 1999; Pakistan’s Prime Minister was none other than Nawaz Sharif. The Indo-Pak relations found a fresh lease of life when Narendra Modi invited Nawaz Sharif in his oath-taking ceremony. However, Pakistan being Pakistan, the relations soon soured when Pakistani authorities held talks with separatists in Kashmir. Well, it is for sure that the 18th SAARC Summit in Kathmandu, Nepal will be shadowed with Indo-Pak relations more than anything else.