A tyre which will never puncture, Michelin gives it to the world

You can never reinvent a popular invention like the wheel but Michelin is doing exactly that. They have come up with the Tweel, which doesn’t need air and will never puncture. This is a great id 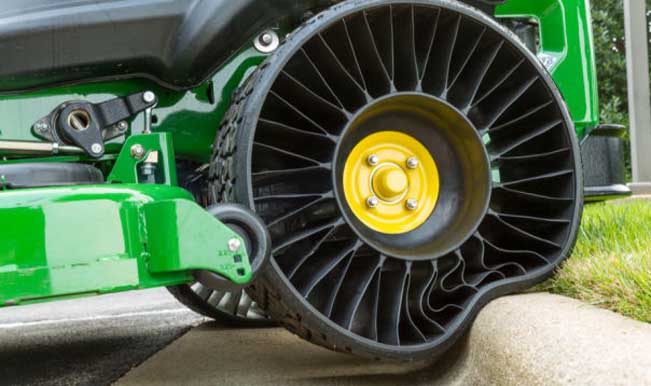 You can never reinvent a popular invention like the wheel but Michelin is doing exactly that. They have come up with the Tweel, which doesn’t need air and will never puncture. This is a great idea that has been made a reality by Michelin. The all new radial tyres which do not need air don’t need a wheel assembly either because it is made into the entire unit to be loaded as a whole. Also Read - Bizarre! Auto Rickshaw Driver Changes Tyre in a Moving Auto, Netizens Call Him 'James Bond'

There is a tyre in the Tweel along with a stiff hub at the middle and the shear beam but what makes Tweel different from a regular tyre is the way that these components are connected together. The spokes that are either made from alloy or metal are made from polyurethane which always retains its form and is flexible. Also Read - Thai rubber farms stretched as US-China trade war saps demand

The main point of this important breakthrough is that you will never have a flat tyre which means more boot space because the need for carrying a spare tyre is eradicated. The Tweel is not only a good and effective way to drive without fear of the road conditions but also has immense use in countries where there are no roads. Vehicles like the Humvee which is the military version of Hummer and similar vehicles used by peacekeeping forces will benefit from this technology to keep going even when the bullets are flying.

The research has lasted for over a decade with leaks being seen for the last couple of years of social media platforms and on various motoring threads but it looks like the idea of a puncture-less tyre has finally taken the physical form. Michelin is said to mass produce the Tweel in their Greenvile facility in South Carolina, USA.