A Year After Demonetisation, Old Rs 500 and Rs 1000 Notes Being Sold on eBay India

When Prime Minister Narendra Modi announced the much ambitious demonetisation move, i.e. the devaluation of high-value notes on November 8, 2016, he had various goals in mind. From eliminating black money (illegal cash) and fighting terrorism to encouraging digital payments, PM Modi thought of it all. Little did he know that one year down the line, the same ‘devalued’ Rs 500 and Rs 1000 notes will be sold at exorbitant rates on online marketplaces like eBay India.Also Read - Viral Video of Man Crawling Like Snake to Cut Illegal Electricity Connection Leaves Internet in Splits | Watch

Following the demonetisation move, the government had mandated and provided sufficient time for the devalued Rs 500 and Rs 1000 notes to be exchanged or deposited with the banks. However, it has been found that these devalued notes are now being sold on eBay India, one of the renowned e-commerce websites. The price range of the old Rs 500 and Rs 1000 notes ranges from Rs 179 to Rs 5000! Also Read - Why Are Donkeys Disappearing From Andhra Pradesh? Reports Claim They Are Being Illegally Slaughtered For Meat

The listings on eBay India have highlighted unique features of the old currency. These ‘unique features’ include the number 786 that is considered auspicious in some religions, notes signed by former Reserve Bank of India governers Raghuram Rajan, C Rangarajan, or S Venkataraman, a note marking 75 years of Dandi March, notes with the same prefix, among others. 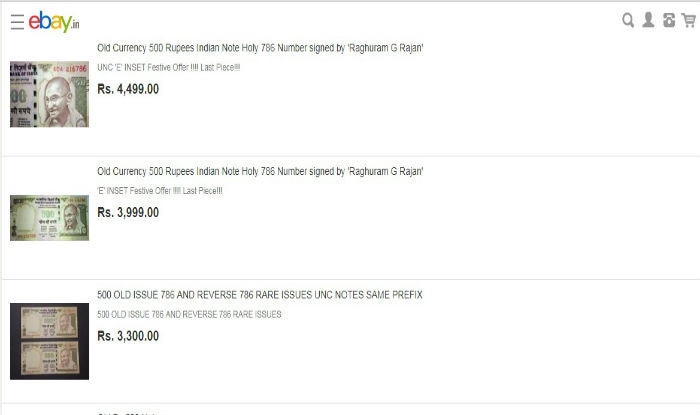 It might be noted that currency can only be exchanged and not sold, according to the Reserve Bank of India Act, 1934. Selling currency violates sections 22, 23, 24 and 26 of this Act. Moreover, since the government has devalued these notes, or in other words, removed them from circulation, possession of Rs 500 and Rs 1000 notes in larger numbers is a punishable offence.