The unique identification number issued by the government, Aadhaar, has been growing to become an integral part of our day to day life. From getting admission for children in schools to paying our annual income tax, Aadhar Card had become mandatory for every process in India. However, the downside of storing this biometric data has been unveiled which brings back people’s fear of the dark web. According to a Ministry of Electronics and Information Technology that has been leaked online, Aadhaar has been hacked, and the data of various Aadhar card holders has been leaked online. Also Read - Republic Day 2021: Patriotic Movies in Hindi, Bengali, Malayalam, Tamil, Telugu to Watch on Disney+ Hotstar

The picture of this official letter of Ministry of Electronics and Information Technology was first shared by The New Indian Express and has since gone viral on the internet. The letter has Prime Minister Narendra Modi’s government finally accepting that various Aadhar details have been leaked online. Aadhar card has been linked to bank accounts by the NDA government, and this massive leak poses a huge threat to the safety and security of the bank accounts. The data of Aadhar card is extremely sensitive information that has been cautiously guarded by the government, however, the letter confirms that the security has a loophole as data of numerous people have found a way to the world wide web. How to apply for new Aadhar Card and update Aadhaar details – Log on to uidai.gov.in official website.
Also Read - Joe Root Can Play 200 Tests And Score More Runs Than Sachin Tendulkar: Geoffrey Boycott

The office memorandum which has been doing the rounds of social media confirms that personal identity of individuals, including Aadhaar number and other sensitive information, has been leaked to the public domain. The letter speaks of punishing the culprit who has done this offensive act. However, a larger issue has been highlighted by this incident. The NDA government has been forcing people to link their Aadhar Card in everything from secure banking accounts to income tax returns file. This data leak proves the huge threat that the linking of Aadhaar can pose to Indians as the data is clearly no longer secure. Also Read - Google Celebrates India's 72nd Republic Day With Beautiful Doodle Showcasing Nation's Diversity

Here is a picture of the leaked letter 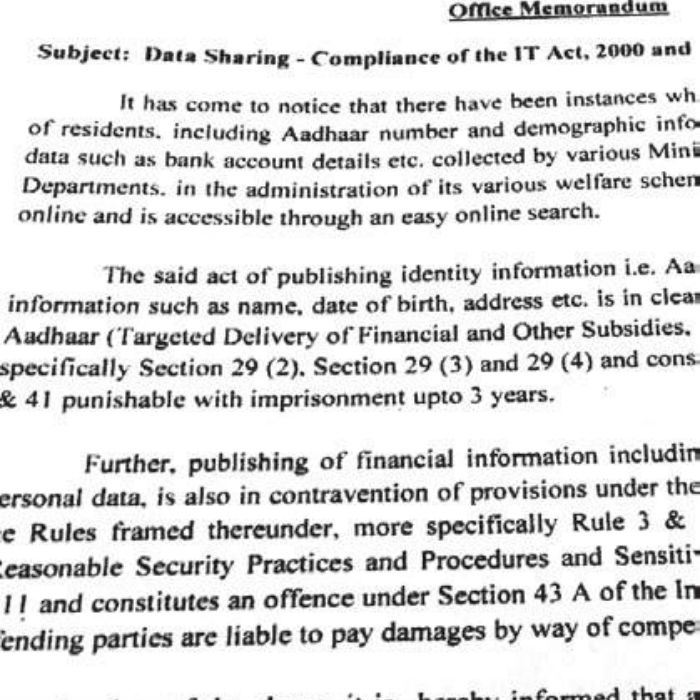 While the authenticity of the letter is not checked by us, the image of the letter clearly shows that the Indian government is not yet prepared for having a single identity proof which is secure. Earlier in the week Aadhar details of cricketer MS Dhoni were leaked online which angered his wife, Sakshi Dhoni. However, the Aadhar centre which played a role in this irresponsible leak was soon blacklisted for ten years. Meanwhile, this latest news adds to the distress that Aadhaar as a UID has been bringing to Indians.