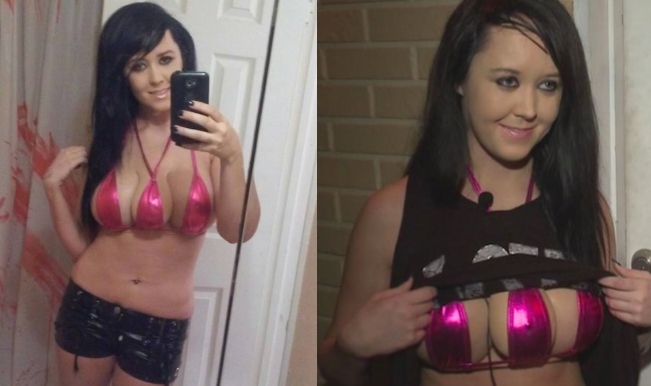 London, Sept 29: The triple-breasted woman is again in news for keeping a teen as a sex slave and carved her name into his chest with a steak knife, it has been revealed. The teenager told the Sun that Alisha Hessler, who gained fame for her fake three breasts, beat him and humiliated him. The teen continued that Hessler turned him into a slave and now he was physically scarred for life and he has to live with the shame of what she had done to him. The teen claimed that he spent just over two weeks in Hessler’s house which was filled with whips and chains. Also Read - SUN vs SSK Dream11 Team Hints, Dream11 ECS T10 Stockholm, Botkyrka: Captain And Vice-Captain, Fantasy Cricket Tips Spanga United CC vs Stockholm Super Kings Shield Final in Marsta Cricket Club at 5:30 PM IST Friday July 10

Referring herself as Jasmine Tridevil (which isn’t her real name) this woman has spent $ 20,000 to add a third breast to her body. ‘Third breast’ sounds and is weird, but Jasmine saved bucks for three years to match up the cost of this cosmetic surgery. She wants to star in her own reality show and for that she has done such a bizarre thing. This isn’t the only reason, second one is more weird than the first. She wanted to make her look unattractive, so that she need not to date any boy. We guess she has suffered from a heartbreak and hence such kinky step. Also Read - UFO Sighting? Alien Ship 25 Times The Size of Earth Spotted Near the Sun, Claims UFO Hunter

Brace yourself because bizarreness doesn’t end here, it starts now. Jasmine Tridevil is now claiming that she will show the entire video of her cosmetic surgery to the world. She will produce a ‘self-documentary’ which will consist the whole footage of how her duo transformed in a  trio. Is this a way of reimbursing her $ 20,000? She has been disowned by her parents, and they are not talking to her since the surgery. At first no doctor was ready to execute such surgery because it was a breach of ethics. But after some research she found one and the surgery was concluded successfully.