Before taking the challenge Poonam has nominated all three khans; Shahrukh Khan, Salman Khan and Aamir Khan to join the cause. Poonam Pandey looked sensual and hot in black two piece bikini, which she donned for the challenge. 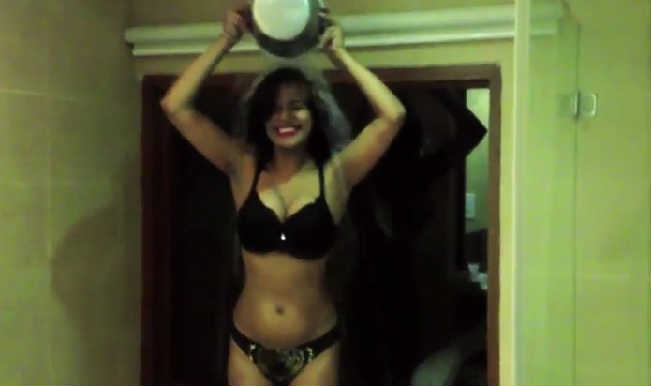 The ALS Bucket Challenge is quite making a trend across the world. Off late Indian celebrities are also taking up the challenge by pouring bucket full of ice water over their head. Each one who takes up the challenge has to nominate someone else to take up the challenge later on. Also Read - Poonam Pandey shows off her cleavage in new sexy black bikini pictures & video juggling oranges!

The Nasha actress, Poonam Pandey was challenged by RJ Pakhi and RJ Ashish from Red FM to take up the challenge. The sultry actress was more than happy to join the good cause. She readily accepted the challenge as she got another chance to take off the clothes for the camera. Before taking the challenge Poonam has nominated all three khans; Shahrukh Khan, Salman Khan and Aamir Khan to join the cause. Poonam Pandey looked sensual and hot in a black two piece bikini. Also Read - Poonam Pandey's latest video is just too hot to handle!

The ALS Ice Bucket Challenge was started to raise awareness on amyotrophic lateral sclerosis (ALS), or Lou Gehrig’s disease. The disease affects nerve cells in the brain and the spinal cord. The ALS challenge involves dumping a bucket of ice water over your head and also challenge someone to do the same. The person who has been challenged has to take up the challenge within 24 hours or donate $100 to the association.

Stars who took up the challenge include Tom Cruise, Nicole Kidman, Robert Pattinson, Akshay Kumar, Bipasha Basu and Abhishek Bachchan, to name a few. There has also been some cases of death due to this challenge that has gone viral now.

Watch the sensous and hot Poonam Pandey taking the challenge in the video below.