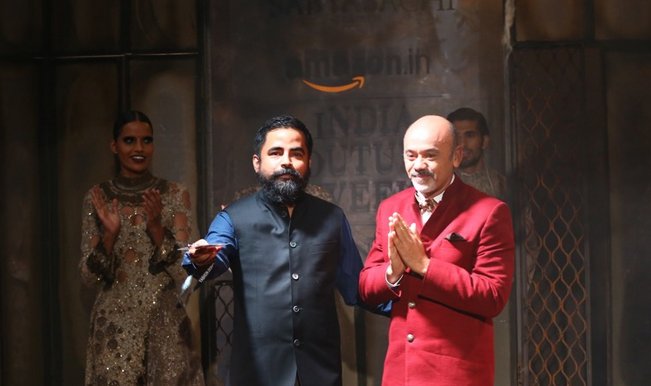 Sabyasachi Mukherjee opened the Amazon India Couture Week (AICW) 2015 in New Delhi. The celebrated Indian designer collaborated with Christian Louboutin, famous French footwear designer. Louboutin’s iconic red-soled footwear was seen on the catwalk at the India Couture Week. He is pretty impressed with the designs of Sabyasachi and was too happy to have got together with him for this opening show. Also Read - A Sequin Affair: Add Celebrity-Approved Sequin Saree in Your Wardrobe This Festive Season

Sabya on his part has been smiling all the way, calling Louboutin his ‘showstopper’! The two designers also spoke to Vogue India on their collaboration. Sabya joked that Louboutin landed at the wrong place at the wrong time – his store in Mumbai! And that is how they decided to do a show together. Also Read - How Cute is This? Sabyasachi Designs Uniforms For Underprivileged Girls of Jaisalmer School to Promote Education | See Pics