Anita Hassanandani posts a series of photos in which she is wearing a basic black and white gown. She looks fabulous in all the pictures.

Actor Anita Hassanandani has posted a set of pictures on Instagram and she looks equally stunning in all the pictures. The Naagin 3 star is seen flaunting a monochrome look wearing a black gown that has a giant white bow detailing at the bust. The actor rocks the stylish look with much elan as a pair of long silver earrings and dewy makeup add more edge to her appearance. Not just her Instagram timeline, Anita’s Instagram stories are also filled with her photos in which she’s wearing the same outfit. Check this out: Also Read - Anita Hassanandani, Rohit Reddy As They Embark on Journey of Parenthood: It Was Awkward and Overwhelming Moment

Too glam to give a damn🎀

The actor has always been a popular female face of the Hindi television world. However, her image as a fashionista now knows no bound. Anita dons the most gorgeous looking sarees and carries everything with panache. From tricky details like ruffles, sequin, unusual prints and unconventional drapes, the actor’s choice of detailing in her outfits is simply impressive. On her show Naagin 3, Anita has been shown wearing some stunning sarees in the most comfortable and easiest way possible. 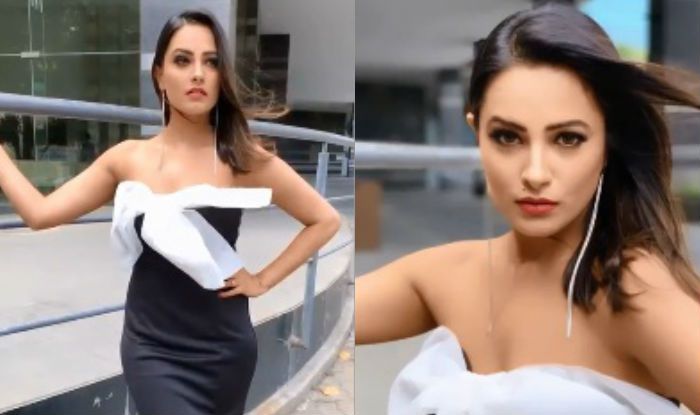 Besides playing Vishaka in Naagin 3, Anita is also known for performing the role of Shagun on Star Plus’ popular show Yeh Hai Mohabbatein. However, the rumours are rife in the grapevine that the show is going off-air soon. When Anita was asked to comment on the same recently, she maintained that she didn’t have any confirmation about it. However, she went on to say that even if the makers plan to shut the show, it’s not going to hurt much since the show is running for over six long years on-screen. She said she will feel bad about missing being on the sets of Yeh Hai Mohabbatein with her other co-stars but she would understand that everything has to come to an end someday.