Watch the video here and see if you can extend help to Rachael and Rod. 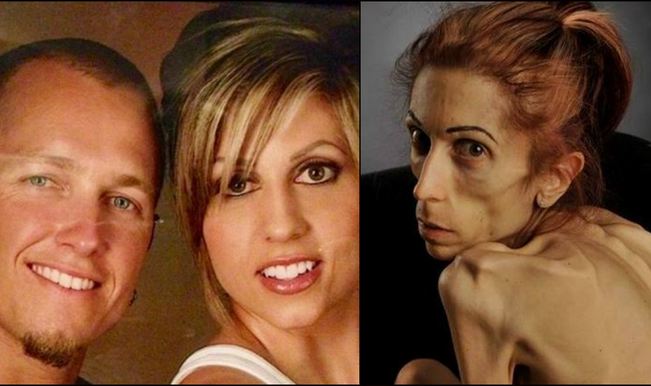 Also Read - Bulimia Nervosa, an Eating Disorder That Thrives in Secrecy Among Teenagers

This story will touch your hearts. A lady who became anorexic and a man, her husband, who left his job to take care of her. Rachael, who is 37 years old, weighs only around 20 kg and there seems to be no road to recovery for her as far as her health is concerned. In this video, Rachael bares her soul and talks about her eating disorder that is part psychological and part physical. The woman, who is reportedly a former actress, is seen in happier times with her husband Rod Edmondson on their Facebook page Rachael’s Road to Recovery. This page was specially created to help Rachael and Rod and spread awareness about anorexia. It also has pictures of the couple like the ones we’ve shared to help showcase their plight. (ALSO SEE: Lizzie Velasquez: The true definition of beauty)  Also Read - Nurse in California Tests Positive For Coronavirus Week After Receiving Pfizer Vaccine: Report

According to newspaper reports, Rachael Farrokh has already suffered heart and kidney ailment. Her husband Rod says she cannot even be induced with excess calories, as that will again mess up her system. And no hospital is willing to admit her for treatment, as she is grossly underweight. There is only one hospital, says Rachael, where she can be treated. And for that, the couple needs help – in any form. Watch the video here and see if you can extend help to Rachael and Rod. Also Read - Demi Lovato Celebrates Her Stretch Marks in a Beautiful Post About Body Positivity - See Pics