Actor Anushka Sharma and Virat Kohli are one of the powered couples of Bollywood and they never shy away to express their love for each other on social media. Taking to Instagram today, the Zero actor has shared a couple of photos enjoying a beautiful evening with her ‘beloved’ Virat Kohli. In the photo, she can be seen sitting on a chair in her Mumbai’s home balcony with a cup of coffee under the setting sun. Also Read - Jhulan Goswami, Anushka Sharma Together Viral Pictures Sends Twitter Into Guessing Biopic on Cards

Clad in a grey t-shirt and black lowers, the beautiful orange light from the sunset falls onto her face making her look gorgeous, as always. The photo has been clicked by Virat and this time he has tuned out to be a photographer for wife Anushka. Also Read - Anushka Sharma Begins Shooting For Jhulan Goswami Biopic? These Pictures From Eden Gardens Hint so

Sharing the post, she wrote, “And just like that a coffee under the setting sun on the balcony of our home became a memory to hold. Captured by my beloved.” (sic) Also Read - Happy New Year 2020: Saif Ali Khan, Kareena Kapoor Khan, Varun Dhawan, Natasha Dalal, Anushka Sharma And Virat Kohli Huddle Together in Selfie Video to Wish Fans From Switzerland

Many celebrities such as Manish Malhotra and Mouni Roy appreciated the view and her beauty. However, Arjun Kapoor chose to troll her in a fun way. He commented, “Socks ki dry cleaning mashallah top notch hai !!!” (sic)

Anushka also did not stay behind from giving a ‘Boss’ reply to Arjun. She replied, “Boss Hum Toh Dhote Hai Socks” (sic) 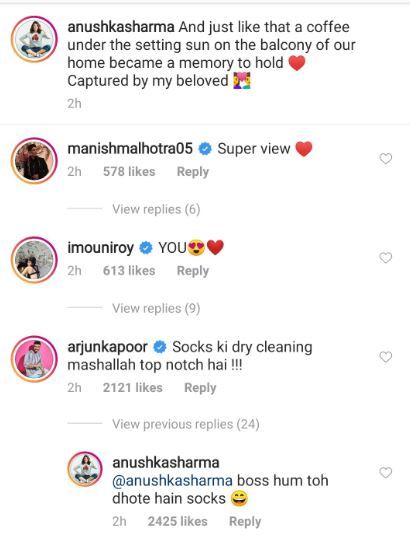 Meanwhile, on the professional front, Anushka Sharma was last seen in Aanand L Rai’s movie Zero alongside actors Shah Rukh Khan and Katrina Kaif where she played the role of a scientist who is suffering from cerebral palsy. As of now, she is yet to make an announcement about her next project. As per the reports, she might have just given a nod to her next film as rumour has it that she is expected to play the role of a cop in her next. As revealed by DNA, Anushka has liked the script and she can’t wait to announce it soon.