Anushka Sharma Trolled as ‘Garbage Lady’ on Her Nush Post; Asked Not to Throw Garbage on Instagram

Anushka Sharma trolled and labelled as 'garbage lady' by netizens

Actor Anushka Sharma has been into buzz from last few days after a video of her yelling at a Mumbaiker went viral on social media. The video was shared by her husband and Indian cricket captain Virat Kohli. Recently, the 30-years-old actress has shared another video montage of her collection Nush on her Instagram and captioned the picture as, “Your shopping cart is about to get bigger than ever Create a wish list with all the #NUSH looks you love & shop ’em all at @myntra’s End of Reason Sale from 22nd to 25th June! #MyntraEORS | @nushbrand”.Also Read - HIGHLIGHTS | IPL 2022 Retention: Umran Malik, Abdul Samad Biggest Surprise at Retention; Ishan Kishan, Suresh Raina Released

However, little did she know that she will be brutally trolled for her controversial action. Many users labelled her as ‘garbage lady’ while the other wrote, “Why are you throwing garbage on Instagram.?.”use dustbin”.As for your concern, this is the only way to clean INDIA…” Also Read - IPL Retentions: Royal Challengers Bangalore Retain Virat Kohli, Glenn Maxwell and Mohammed Siraj For 2022 Season

While some netizens also believed that it was not right on her part to post the video without blurring the face of the person who was throwing garbage on the road. Also Read - Virat Kohli Viral Video: Virat Shakes His Leg With Co-Players Wife Dhanashree | Watch Video to See His Killer Moves

Check out the video here

Your shopping cart is about to get bigger than ever Create a wish list with all the #NUSH looks you love & shop ’em all at @myntra’s End of Reason Sale from 22nd to 25th June! #MyntraEORS | @nushbrand

Saw these people throwing garbage on the road and pulled them up rightfully. Travelling in a luxury car and brains gone for a toss. These people will keep our country clean? Yeah right!!! If you see something wrong happening like this, do the same and spread awareness. @anushkasharma

This is how Anushka Sharma was trolled 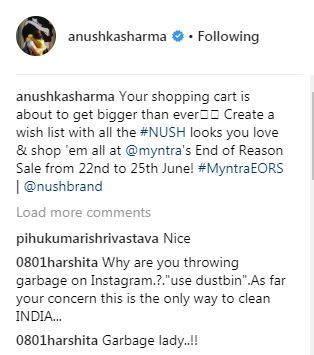 The man who was littering the garbage on the streets of Mumbai was identified as Arhhan Singh and had been a victim of public shaming after the video grabbed eyeballs.

Elizabeth wrote, “How dare you crush somebody’s image/and morale and reputation and expose him to public hate, a boy who is on the verge of starting his ventures, ..just to prove what good citizens you both are to increase your fan following? How dare you?? If you both really cared or bothered about cleanliness, then you would actively do something about all the garbage in your own lane.. You would make a noise and use your VOICE to urge the municipal authorities to take action at least in the lane where you live, to start with, which you haven’t.

Posting videos of fake bravado just to fool your followers. If your intention were genuine, then you would pull over and politely correct the person for littering IF THEY DID in a decent and real manner… and not by displaying such a rude and arrogant attitude, and then posting it for the world to see! You have caused a lot of grief with your post & this is morally and humanitarianly very wrong.”