AR Rahman vs Anu Malik Rap Battle: Who is the Real Music maestro?

The battle starts with Anu Malik singing with his ‘world famous’ lyrics that just needs to rhyme. 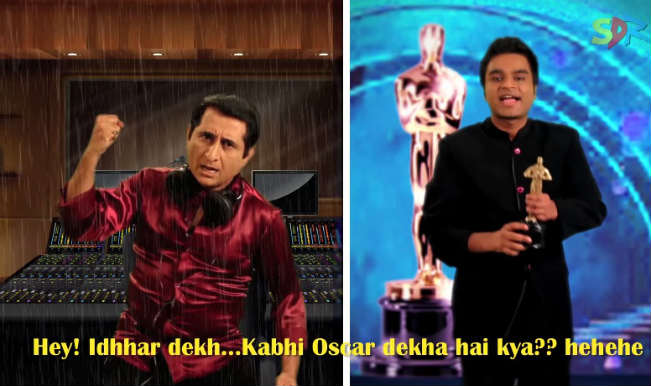 Also Read - Viral Video: Baby Elephant Refuses To Wake Up From Nap. Watch What His Mother Did Next

The mother of all battles in the field of music is all ready to take place. Yes, it is Oscar winning singer, composer, songwriter AR Rahman on one side and the King of massy, sassy, at times, little trashy music, composer and singer Anu Malik on the other side. Shudh Desi Raps, a YouTube channel who are popular for their videos of pitting big stars against each other have got AR Rahman and Anu Malik battling each other in this funny video. Also Read - Happy Birthday AR Rahman: The 5 Most Iconic Songs of All Time by The God of Music

The battle starts with Anu Malik singing with his ‘world famous’ lyrics that just needs to rhyme. He mocks Rahman with his ‘original’ composition with the likes of ‘Ek Garam Ki Chai Ki Pyali Ho’ to ‘Hum Dono Hai Alag Alag’. But AR Rahman, one of the biggest names in the world of music straightens few points in his own subtle manner. Also Read - AR Rahman's Mother Kareema Begum Dies, Music Maestro Pays Tribute on Twitter

Though one have quite appreciated and enjoyed the hilarious rap battles by the YouTube channel, one cannot help noticing the climax of the recent videos, which contains a hint of foul language left to the viewer’s imagination. The audience have loved the clean humour and powerful lines and would hope they stick to it as the video depicts big names. In the meantime, enjoy the not-so lovely bickering in form of rap between AR Rahman and Anu Malik and decide who is the real music maestro?