Are Republicans like Grumpy Cat? Barack Obama thinks so! (Video)

The US President compared the Republicans to the animation character. 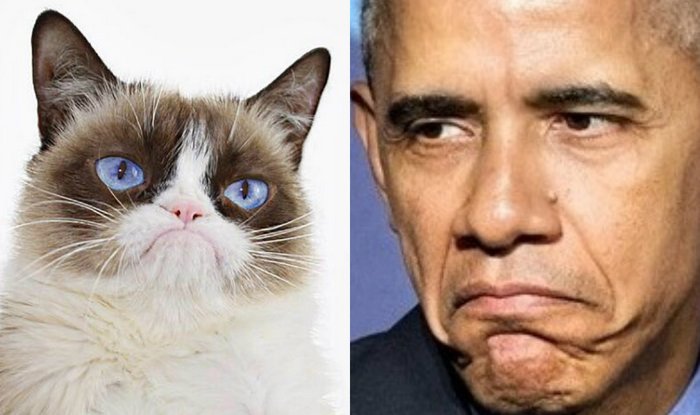 US President Barack Obama compared the Republicans to the character of Grumpy Cat that is so popular on social media and in the movies. The Cat is always sulking and unhappy about something, but is still popular because it’s just an animation character. We can’t say that about The Republicans in America, it seems. Speaking at the Democratic National Committee’s Women’s Leadership Forum in Washington, Obama asked, “Why is it that Republican politicians are so down on America?” Also Read - India Will Face No Problems in Taking Forward Ties With US Under Joe Biden: S Jaishankar

As Obama described the opposition as the Grumpy Cat, he even made a face like the feline. “They (Republicans) are gloomy. They’re like Grumpy Cat,” he said. “I know it’s political season, but you listen to (the Republicans) and they’ve constructed this entire separate reality. It’s like the Twilight Zone,” the President added. Also Read - Was Pakistan Military Helping Osama? Obama Gives Blow-by-blow Account of Abbottabad Raid

“The way (they) approach climate change is a good illustration of the problems that they’re having,” Obama said.

Obama further cited a doctor-patient example to make his point clear. He said, “Let’s just take an example. If you went to 100 doctors and 99 of them said you are really sick. You’ve got, let’s say, high cholesterol. What would you do? Would you say those 99 doctors are crazy and part of a wild-eyed socialist plot to prevent you from eating cheese?”

But it’s the Grumpy Cat part that has made his speech video at the Women’s Leadership Forum go viral. Watch it here!