The Gooners could not contain their pride and emptied their stash of love as the Arsenal squad, including head coach Mikel Arteta, wore #BlackLivesMatter themed tees over their jersey and took a knee to show solidarity with the protesters before their friendly against Brentford at the Emirates Stadium

The Gunners might have lost the friendly against Brentford at the Emirates Stadium but their surely won all hearts as the Arsenal squad appeared on the field in black tees over their red and white jersey that evocatively spelled support for Black Lives Matter. Ahead of the game, the Arsenal squad, including head coach Mikel Arteta, took a knee to show solidarity with #BlackLivesMatter protesters.Also Read - Manchester United vs Arsenal Live Streaming English Premier League in India: When and Where to Watch MUN vs ARS Live Stream Football Match Online on Disney+ Hotstar; TV Telecast on Star Sports

While sportsmen’s solidarity with social causes have cost soccer players their career in the past, like that of Colin Kaepernick or Borussia Dortmund’s Yellow Card during Bundesliga matches, Arsenal evidently grabbed eyeballs for their legendary move. FIFA too had advised Football Associations to use “common sense” in consideration the context surrounding the events. Also Read - Manchester United Make Their Point Against Chelsea; Manchester City, Liverpool Close In At the Top

Racial protests gained steam in the US after the gruesome murder of African-American George Floyd by Minneapolis officers. The recent merciless killings of Ahmaud Arbery, Breonna Taylor and Floyd, triggered the Black Lives Matter movement that trickled from America to the rest of the world. Also Read - Roy Keane Reacts on Cristiano Ronaldo Being Benched For Manchester United's Game vs Chelsea

Recently, footballers individually have shown solidarity for the protests against police brutality. Borussia Dortmund was given Yellow Card for removing his jersey to reveal a T-shirt with the message “Justice for George Floyd” written on it while Schalke’s Weston McKennie wore an armband with a similar handwritten message and Borussia Mengladbach’s Marcus Thuram kneeled after scoring against Union Berlin.

Wearing black tees with phrases “I’m not black but I stand with you”, “I can’t breathe”, “We stand for change” and “We stand for solidarity”, the Arsenal squad won Gooners hearts who instantly emptied their stash of love for their ‘Classenal’.

We stand in solidarity.

Taking to their respective handles on social media, while one user gushed, “This Huge! (sic)”, another lauded, “Greatest club on Earth no cap (sic)” and yet another advised, “Love my club ❤️ now we must hire more black coaches/trainers/staff and actually take the next step towards true equity!! (sic).” 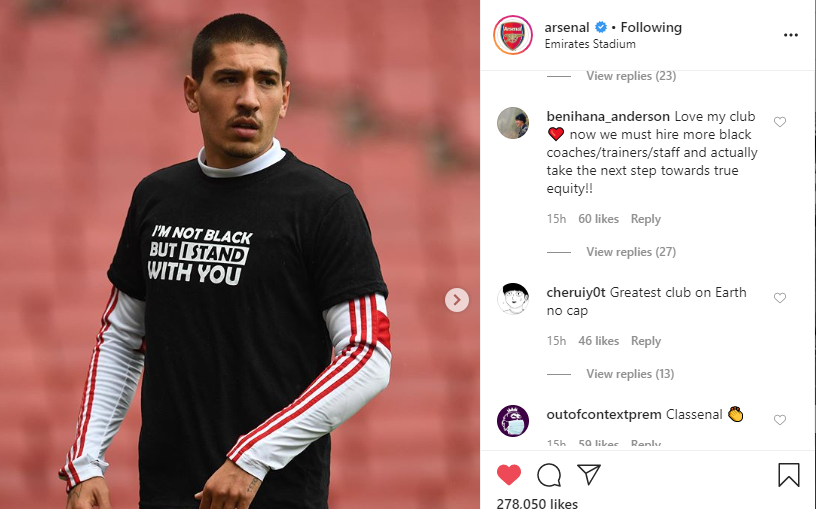 Arsenal hit an unexpected bump ahead of the return of the Premier League as they lost to Brentford 3-2 at home, in a friendly at the Emirates. In a free transfer talk this summer, the Gunners are reportedly considering to replace David Luiz with the man he played alongside at Brazil and also Paris Saint-Germain legend, Thiago Silva. The team is gearing up to face Man City on June 18.