The historic gold came India’s way after men’s team put on a brave and consistent show to knock down opponents 227-225, winning just by two points. 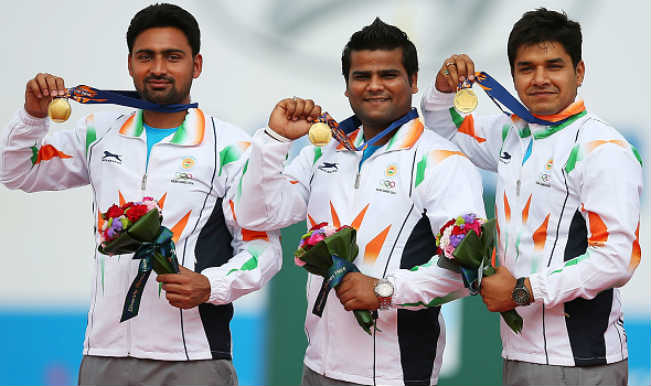 The Asian Games 2014 brought another good news as India clinched second Gold medal in the multi-nation sport event. In a closely fought battle at the Gyeyang Asiad Archery Field, the Indian compound men’s archery team comprising of Rajat Chauhan, Sandeep Kumar and Abhishek Verma defeated a strong Korean team to win a second Gold medal for country at the 17th Asian Games. Also Read - I Regret Becoming a Cyclist, All I Now Want is my Old Life Back: Swaran Singh

The historic gold came India’s way after Men’s team put on a brave and consistent show to knock down their opponents 227-225, winning just by two points. As Men’s archery team made India proud, we bring to you few things about the champion-trio that will amaze you. Also Read - Living in Abject Poverty, Former India Cyclist Working Night Shift As Security Guard With Daughter Battling TB

1)     19-years-old Rajat Chauhan is the youngest member of the team; he was born on 30 December 1994, while other two members Sandeep Kumar and Abhishek Verma are both 25-years-old.

3)     Earlier this month Rajat Chauhan became the first Indian compound archer to have qualified for the Archery World Cup Final. He finished fifth after losing to Frenchman P J Deloche in the quarterfinals.

4)     Abhishek Verma also works as an income tax inspector for the Indian government and this year he was presented with the prestigious Arjuna Award.

5)     Rajat Chauhan’s mother Nirmala Chauhan once pawned her gold jewellery to buy his son an imported archery kit from US worth 2 lakh rupees.