Belonging to the ethnic group Chutia (also spelt as Sutiya) from Assam, Priyanka Chutia's online job application at government-run National Seed Corporation Limited got rejected due to confusion regarding the similar Hindi slang

“Imagine yourself going for a presentation and the panel laughs at you at the very first introduction speech,” an evidently frustrated Assamese woman Priyanka Chutia asked on a Facebook post. Belonging to the ethnic group Chutia (also spelt as Sutiya) from Assam, Priyanka Chutia’s online job application at government-run National Seed Corporation Limited got rejected due to confusion regarding the similar Hindi slang. Also Read - Vulnerable Wildlife at Risk As 116 Animals Including 11 Rhinos Dead in Assam's Flooded Kaziranga Park

Descendants of the Chutia dynasty that reigned from 1187 to 1673 and formed their kingdom in the present-day Indian states of Assam and Arunachal Pradesh, most of the people from Chutia community reside in Upper Assam districts. While some are even found in Lower Assam and Barak valley, Priyanka belongs to Assam’s Gogamukh.

She said, “I am unable to move ahead and apply for the job as other problems cropped up. I don’t know how to fix it,” after her registration was finally accepted a day later. Frustated but not wanting to file any complaint against the organisation, Priyanka shared her ordeal in a Facebook post to make people aware.

She lashed, “A Govt. owned big company like National Seed Corporation ltd. rejects my online registration form for a job vacancy that I wanted to apply. And the reason is nothing but my Surname and the portal keeps on saying to use proper naming word. I feel really sad and frustrated at times explaining people that I am not using slang but it’s a community where i belong. #We really need to do something to identify ourselves and make recognisable nationally. This is not the first time. Imagine yourself going for a presentation and the panel laughs at you at the very first introduction speech. #I think my fellow community members must work on this rather than fighting over some petty issues on Facebook #BhumiputraKundiHena (sic)” 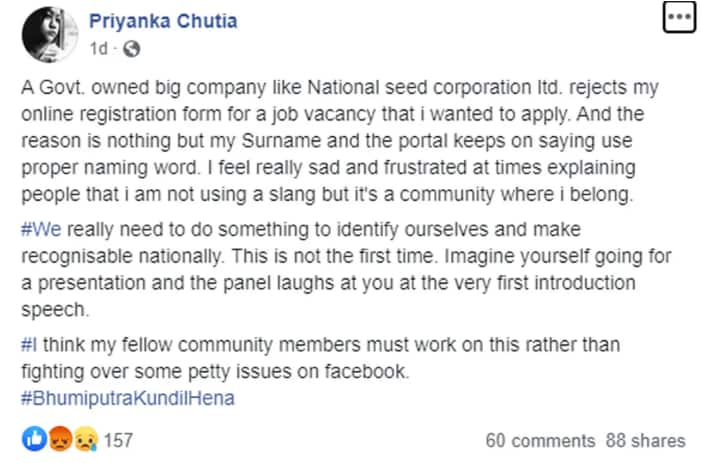 In an email response to The News Mill, the technical help desk at NSCL shared, “There was a technical flaw in the code filtration of the name of the candidates which was rectified in early stages.”