Asteroid breakup captured for the first time by astronomers 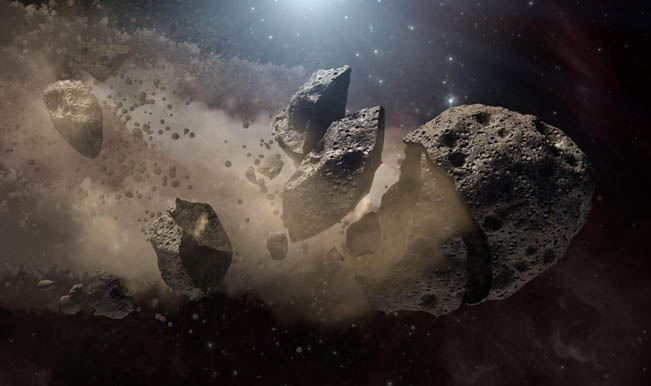 NASA has successfully been able to complete the capturing and recording of breathtaking cosmic images of an asteroid breakup. From late 2013 to early 2014, they observed, with the help of the Hubble Space Telescope, the breaking apart of an asteroid located in the asteroid belt between the planets Mars and Jupiter. This phenomenon has been observed on film, for the first time in history, with the asteroid disintegrating into around ten pieces in slow motion. Also Read - US Spacecraft Named After NASA Astronaut Kalpana Chawla, The First India-Born Woman to Enter Space

The rocky asteroid, called P/2013 R3 by the International Astronomical Union (IAU) was one of many celestial objects that populated the asteroid belt, located between the orbits of the two planets.  It was said to be around a kilometer in diameter when it began to disintegrate, according to the team that studied it. The recorded pictures show the asteroid crumbling into smaller fragments between October last year and mid – January this year. Also Read - NASA Gears Can Withstand Freezing Cold During Lunar Mission

It was first seen in September 2013 and described as a fuzzy object by astronomers who viewed it with sky surveys in Arizona and Hawaii, using ground – based telescopes. Scientists then went to the W. M. Keck Observatory on Mauna Kea, a dormant volcano in Hawaii, to follow up on the observations. They noted three dust clouds – covered bodies moving together. The size of the cloud was nearly equal to the diameter of the earth. Also Read - 'Potentially Hazardous' Asteroid Will Zoom Past Earth on September 1, Is It Dangerous? Know Here

David Jewitt, a UCLA astronomer leading the research, said that the observatory conclusions showed that the object needed to be observed with the orbiting Hubble Space Telescope. They observed that the cloud contained ten objects as fragments with comet-like dust trails. The four largest pieces possessed a diameter of about 400 meters each. Also, the information provided by the telescope showed that the fragments slowly moved away from each other at a speed of just under 1.6 kilometers per hour.

The scientists have ruled out the possibility of the asteroid breaking apart due to a collision with another object. The way in which the fragments are slowly moving does not suggest a violent impact. If it was the case, the disintegration of the asteroid would have been much quicker, and would produce debris that would have travelled much faster than what they observed. Also, the ten resultant fragments did not all emerge at the same time, but over many months, which is not the case when two objects collide in space. Scientists have also ruled out the possibility of the asteroid breaking due to the pressure of the warming and vaporizing of interior ices, since it occurred far away from the sun in the asteroid belt, where it was far too cold for this to occur.

Asteroids are huge chunks of solid rock made of materials like clay, nickel-iron and silicate, which are durable in nature, making them less likely to simply break apart.

The impossibilities led the astronomers studying the asteroid to consider a phenomenon that had never been observed before – the subtle but prolonged effect of sunlight. Any object, when hit with sunlight, radiates it back into space. Round objects that do so do not have problems with structural stability. But when irregular shapes like asteroids radiate sunlight back, it exerts a torque on them, causing them to spin. The faster it goes, the more centrifugal force is generated so the asteroid becomes unstable and ruptured, and eventually pulls itself apart. This phenomenon, known as the YORP effect, though discussed, has never been observed.

For this phenomenon to work, P/2013 R3 had to have a fractured interior caused due to non-destructive past collisions. It is to be noted that though the net force due to sunlight is extremely weak, prolonged exposure can blow them apart and create dust and debris.

Astronomers assume that though most of the debris would plunge into the sun, a small amount could possibly enter the atmosphere of the earth as meteors, in the future.