Bahubali 2 full movie is available to download & watch free online on Google Drive, while makers of Baahubali 2: The Conclusion seek action against piracy

As of the tenth-day collection, Baahubali 2: The Conclusion stands at Rs 1,047 crore worldwide according to a report on Box Office India.

On the one hand, if Baahubali 2: The Conclusion humongous box office collection sandstorm is growing stronger with every passing day, the craze for the film has invited the piracy troubles. The film suffered several setbacks with the climax video of why Kattappa killed Bahubali was circulated on WhatsApp. In an attempt to kill the buzz by releasing the suspense behind the biggest mystery, the miscreants took the illegal step. In an another incident, SS Rajamouli’s ambitious project was leaked by a Kuwait-based user on Facebook, who posted the link to watch Bahubali 2 movie online as well as do free downloads. Also Read - RRR Released Postponed: Ram Charan, Jr NTR Starrer NOT To Release On October 13 | Here's Why

A delegation of Tamil Film Producers Council today met city Police Commissioner Karan Singha seeking action against piracy of the film. The movie has been pirated by “internet mafias” in the name of “Tamil Rockers” and has been uploaded in many of their websites to facilitate illegal download, causing a “humongous loss” to the film producers, TFPC said in its complaint. 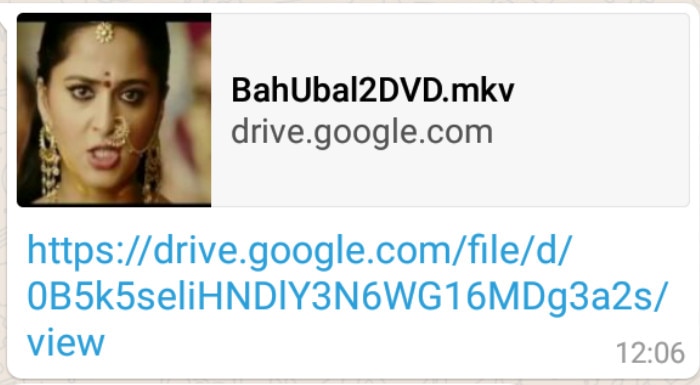 Baahubali 2 makers took the legal way to thwart piracy issues. But now an innovative method has sprung where Google Drive is used to provide the full movie video to watch it online or make illegal downloads. In a hassle-free manner, the film is shared by movie buffs who do not wish to spend money in theatres and watch India’s biggest film for free.

Prabhas-Anushka Shetty film which is unstoppable at the box office by minting Rs 1000 crore plus could have made even greater numbers had not fallen victim to online piracy.  As of the tenth-day collection, Baahubali 2: The Conclusion stands at Rs 1,047 crore worldwide according to a report on Box Office India. The box office collection of Hindi version of the film is Rs 508 crore. The film is yet to release in countries like China and Japan, you can very well imagine – there is no stopping the Bahubali 2 hurricane.