The green-eyed actor, who plays a charming criminal in the film, is seen performing some breathtaking stunts and carrying big mighty firearms. 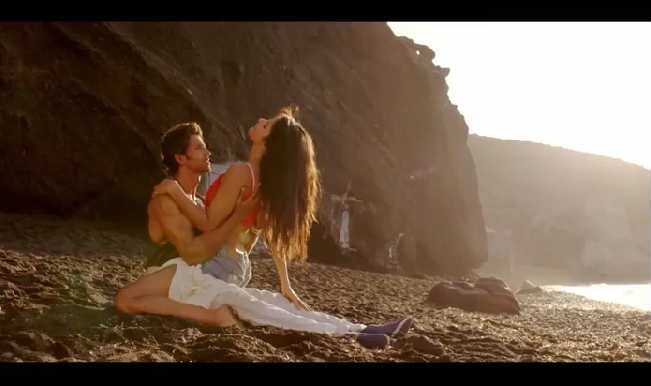 Bomb blasts, cars crashing and rolling and speeding bikes are what we can sum up the Bang Bang trailer as! The theatrical trailer of the Hrithik Roshan and Katrina Kaif-starrer gives us an additional insight on what this much hyped out-of-the-box action thriller, Bang Bang, has to  offer. No doubt the filmmakers have managed to make the Bang Bang trailer as thrilling as they promise the movie to be; it seems to keep you gripped on to your seats! Also Read - Hrithik Roshan as Sourav Ganguly in Biopic? BCCI President's Answer Will Make Your Day

But that’s not all. All the ladies out there are sure to drool over the hot and sexy Greek God, Hrithik Roshan. Well, that is how he looks in the trailer, younger, handsome, intriguing and very, very sexy. The green-eyed actor, who plays a charming criminal in the film, is seen performing some breathtaking stunts and carrying big mighty firearms. But above all his enthralling looks will definitely keep your eyes intact on to the screen. He just seems to be at so much ease and in the skin of his character in the Bang Bang trailer. Also Read - Tiger 3: Salman Khan to Begin Shoot in February? - All You Need to Know About YRF's Film

Katrina Kaif is highly overshadowed by Hrithik’s power-packed performance, at least in the trailer shots. Neither does she look more beautiful than what she has been looking in her previous films. Nothing new about her. Katrina fans will also love to hear her speak…no dubbing the actual Katrina speaking with her foreign accent. But girl, we must tell you that as much hard work you put in to stay fit, put at least half of it to improve your acting skills!

Nonetheless, the Bang Bang trailer and especially Hrithik will surely give you the carnal feeling to really go for this upcoming action film. Bang Bang is a rehash of Hollywood movie Knight and Day starring Cameron Diaz and Tom Cruise in lead roles. Directed by Siddharth Anand, the Hindi action thriller is produced by Fox Star Studios. Scheduled to hit the big screen on Gandhi Jayanti (October 2), Bang Bang will release in three languages – Hindi, Tamil and Telugu.