In a three-minute video, Ahmadullah said that people nowadays use the 'Haha' emoji to "mock" people, while adding that using it just for fun is fine. "If your reaction was intended to mock...people...it's totally forbidden in Islam," he added.

Dhaka: A prominent Muslim Bangladeshi cleric  Maulana Ahmadullah has issued a fatwa against people using Facebook’s ‘Haha’ emoji, calling it “totally haram (forbidden)” for Muslims. According to an AFP report, the cleric who has over three million followers on Facebook and YouTube posted a video warning on June 19 against the use of Haha react on Facebook to mock people.Also Read - Google Doodle Thanks All The Healthcare Workers and Scientific Researchers With a Heart Emoji

In a three-minute video, Ahmadullah said that people nowadays use the ‘Haha’ emoji to “mock” people, while adding that using it just for fun is fine. “If your reaction was intended to mock…people…it’s totally forbidden in Islam,” he added.

“Nowadays we use Facebook’s haha emojis to mock people. If we react with haha emojis purely out of fun and the same was intended by the person who posted the content, it’s fine. But if your reaction was intended to mock or ridicule people who posted or made comments on social media, it’s totally forbidden in Islam,” Ahmadullah said in the video.

“For God’s sake, I request you to refrain from this act. Do not react with ‘haha’ to mock someone. If you hurt a Muslim, he may respond with bad language that would be unexpected,” he said further. 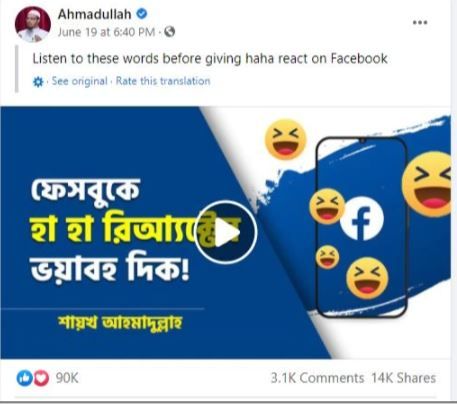 While many of his followers agreed with his teaching, several others made fun of it — using the “haha” emoji.

Here’s how the internet reacted:

Ahmadullah is among Bangladesh’s new crop of internet-savvy Islamic preachers who have drawn millions of followers online, reported AFP. Their commentaries on religious and social issues are hugely popular, drawing millions of views per video.