Monalisa is one the sought actress. Her love for saree will never die. Check her latest pic in a black saree.

Bhojpuri hot bomb Monalisa aka Antara Biswas is making the Internet go crazy with her daayan avatar in Star Plus’ Nazar. The actress has an ocean of fan-following and is an avid social media user. Monalisa took to Instagram to share a few pictures that are simply a treat to the eyes. The actress looks beautiful in ethnic and her accessories match perfectly with her outfit. In a recent post shared by Bhojpuri bombshell on the Instagram, she looks hot and bold in black netted saree. In the picture, she has shared a sneak peek of an event. The diva looks absolutely stunning in black six- yard-long garment paired with black bangles. Also Read - Monalisa Turns up The Heat in Sexy Golden Lehenga, See Photos

Nazar is keeping its audiences glued through interesting twists and it is doing pretty well in terms of TRPs. Monalisa has left no stone unturned to make people across the country go into a frenzy. After creating her niche in the Bhojpuri cinema, the actress tried her luck in the television reality show Bigg Boss and marked another high in her acting career. Also Read - Bhojpuri Hot Bomb Monalisa Flaunts Her Midriff Abs as She Workout During Coronavirus Lockdown

Take a look at Monalisa’s picture: 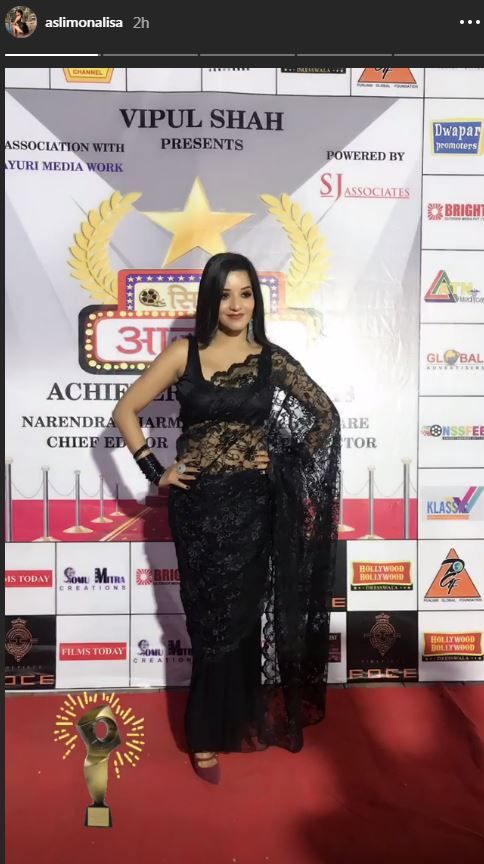 Monalisa is one of the highest paid actresses in the Bhojpuri film industry. She made her debut in a film titled Bhole Shankar in 2008 and has worked in a number of films since then with the industry heavyweights.

Monalisa appeared in season 10 in one of the most controversial yet popular reality television show Bigg Boss. She became a household name after appearing the show hosted by Bollywood superstar Salman Khan. She married her Bhojpuri co-star Vikrant Singh Rajpoot while she was inside the house of Bigg Boss. Her wedding ceremony was aired on national television.