Bigg Boss 11 contestant Arshi Khan’s latest transformation has left everyone speechless. Recently, she has posted her bold pictures in a bikini on Instagram but her post was soon filled with hate comments. She has posted a couple of pictures in a floral green bikini but she was trolled and even slut-shamed for wearing a bikini. Few netizens also questioned her religious beliefs and slammed her for wearing revealing clothes. Also Read - Ahead of Bigg Boss 13 Finale; Shilpa Shinde Exposes Sidharth Shukla, Claims He Abused & Hit Her

Think in the morning ❤️✌️

This is how she was trolled 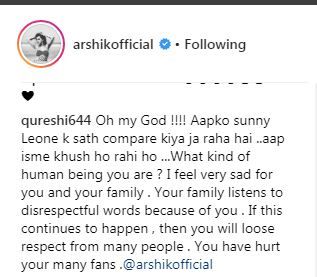 Previously, she was in news for revealing that Vikas Gupta promised her to share the prize money with her but he did not live up to his promise. In 2015, the controversial queen made headlines over her tweet about cricket Shahid Afridi but now she admitted that it was a mistake. She appeared in Rajeev Khandelwal’s JuzzBaatt and talked about the controversy and said, “I respect Mr Afridi a lot. He has done a lot for me. That tweet was a mistake and I should not have addressed him openly about such sensitive issues. Afridi Sahaab ke bahut ehsaan hai mujh par.”