Bigg Boss 13: Paras Chhabra's GF Akanksha Puri's Savage Reply to Him is For Every Couple!

Bigg Boss 13 contestants Paras Chhabra and Mahira Sharma’s bond is just getting stronger day by day. Though Paras is currently dating Akanksha Puri, he was seen sharing an intimate moment with Mahira. Not only this, but both have also confessed their love for each other publically now. Now, Paras’ girlfriend Akanksha took to Instagram stories to share pictures of his ‘stinking dirty shoes and clothes’ from the house to Akanksha’s home with a message that he wants his shoes and clothes to be washed and sent back to him. Also Read - Bigg Boss 13: Fans in For New twist as Siddharth Shukla's Love Affair With Shefali Bagga Blossoms | Watch

In another post, she wrote, “Yaar ye log andar task kar rahe hai ke kya kar rahe hai. My house is stinking. These clothes are in such bad state. So paras im not sending you anything back, kuch wash nahi karwaungi.(sic)” Also Read - Bigg Boss 13: Arhaan Khan Reveals to Rashami Desai That Her House Keys is With Mysterious Man 'Rahul', Latter Gets Upset

Check out the posts here: 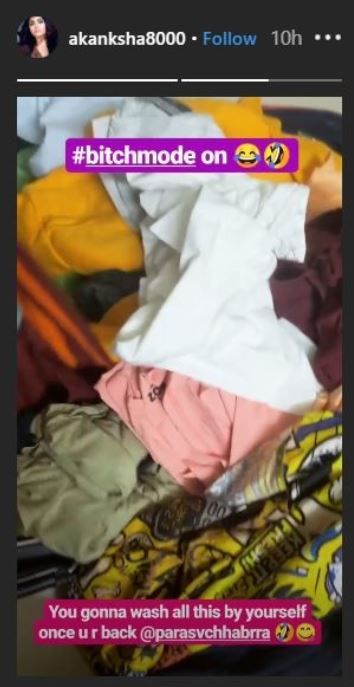 Earlier, talking to India Forum, she said, “Now, even I have started doubting that he has been either playing there for three months or playing with me for three years. I guess my suggested idea is proving heavy to me. Still, I want to wait for him to come out and talk as he left on a very different note. I don’t want to jump to any conclusion.”

Meanwhile, Mahira and Paras have publically accepted their love for each other. In the latest promo, Mahira Sharma tells Shehnaz Gill not to come between her and Paras Chhabra’s bond and relationship. She seriously warns Shehnaz to stay away from Paras as she loves him. Mahira confesses her love for Paras and doesn’t want Shehnaz around him anymore. “Clear words mein bol rahi hu ab isse door rahe, pyar hai mujhe”, Mahira shouts on Shehnaz and then kisses her and Paras kisses her back. Mahra continues, “Mujhe close close bolke tune wohi kia jot ere dil mein tha”.