Calling the incident a 'blot on humanity', he hoped that the deceased animal soon gets the justice it deserves.

Chhapra: Joining millions of Indians who are currently outraging against the gruesome death of a pregnant elephant in Kerala, an artist from Bihar’s Chhapra too paid tribute to the voiceless animal through his sand art.Also Read - Ratan Tata Calls Death of Pregnant Elephant in Kerala a 'Mediated Murder', Says 'Justice Needs to Prevail'

The artist named Ashok, portrayed the elephant pregnant with a baby calf, along with Lord Ganesha and wrote ‘Vishwasghat’ (Betrayal) beneath it. A pineapple can also be seen in the art piece, which reportedly killed the elephant. 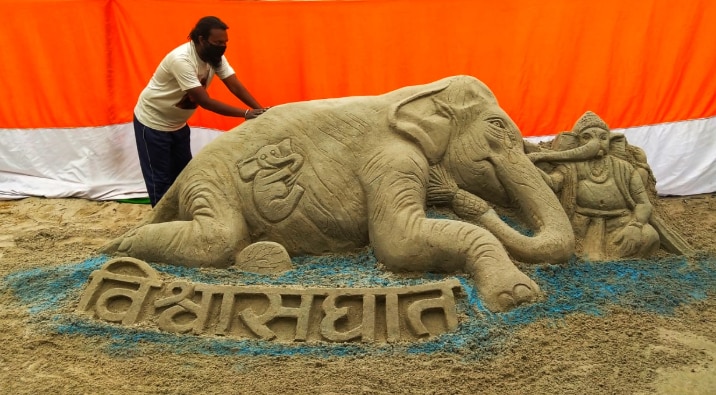 Calling the incident a ‘blot on humanity’, he hoped that the deceased animal soon gets the justice it deserves. The art which has been made at Seedhi Ghat in Chhapra has become quite an attraction for locals, amid the nationwide outrage.

A day before, renowned sand artist Sudarsan Pattnaik on Wednesday too mourned the elephant’s death through his sand art depicting a mother elephant with her calf.

Humanity has failed again………..
One of my SandArt on save #Elephant. pic.twitter.com/nzcM4PNDvr

As per preliminary reports, the elephant had consumed a pineapple filled with powerful firecrackers which exploded in the animal’s mouth in the Silent Valley Forest and died about a week later.

However, later, a preliminary Forest department inquiry stated that the death of the elephant happened not because someone ‘fed’ it firecracker-stuffed pineapple but because the animal must have found the fruit lying somewhere.

In an interview with International Business Times, an Indian Forest Service Officer shared, “No one would have fed the pineapple to the elephant. The animal must have found it lying somewhere and must have consumed it herself not knowing what lies ahead for her” while stating that pineapples filled with firecrackers are used as a snare to catch wild boars that destroy the crops.