Bilawal has his counterpart in India - Rahul Gandhi - in terms of how dumb they are. 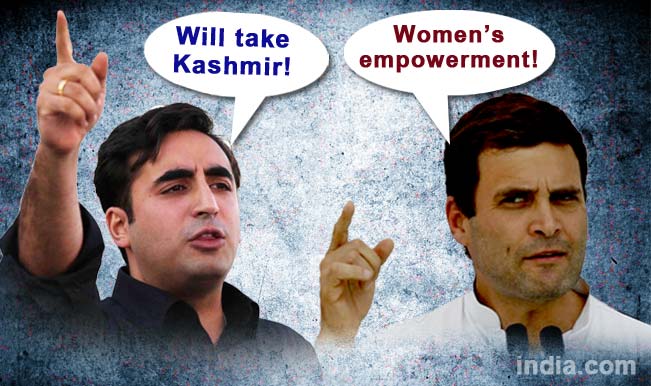 Pakistan People’s Party leader Bilawal Bhutto Zardari made bizarre comment saying that his party would take back entire Kashmir from India if it comes to power. “I will take back Kashmir, all of it, and I will not leave behind a single inch of it because, like the other provinces, it belongs to Pakistan,” said 26-year-old leader. After his remarks, the former Pakistan Prime Minister Benazir Butto’s son Bilawal has became topic of laughs on social networking sites. Bilawal has his counterpart in India – Rahul Gandhi – in terms of how dumb they are. Bilawal Bhutto and Rahul Gandhi both have many similarities. Let’s have a look at the common points they possess. Also Read - 'Nothing More Than Desperate Case of Political Compulsion For Badals', Punjab CM on SAD Snapping Ties With BJP

Young ‘leaders’: Bilawal and Rahul both are presented by their respective parties as the young leaders of the country. Yes they are young but not because of their age. They are young because of the talks they throw out from their mouths which clearly indicate that these kinds of non-sense only a young and in experienced man would say. Also Read - Karnataka: No-confidence Motion Moved by Congress Against BS Yediyurappa Govt Defeated

Hired by the family: Bilawal is the scion of the Bhutto family which has been dominant in the Pakistan Peoples Party for most of the country’s history since independence. Likewise Rahul Gandhi also belongs to the family that has influenced the Congress party even before independence. Taking ahead the tradition of dynasty politics, both are trying hard to keep the influence of their family in the party rather than leading the nation. Though Bilawal and Rahul haven’t shown any miracles during their political journeys so far, both occupy a key position in their parties. The PPP and Congress have both suffered defeat in the recent general elections held in their respective countries.

Nonsense: In the current scenario when Pakistan is in need of economic support and people want development, Bilawal is talking on the issue which is away from the current important issues. He might be following his Indian counterpart Rahul Gandhi and is only succeeding in projecting himself as dumb. When the Indians were looking for development and answers on key topics like corruption in Congress, Rahul was talking about ‘women’s empowerment’.

It seems that Bilawal is inspired by Rahul and he is religiously putting efforts to be like him by showing his inexperience through his thoughts with such baseless comments. But Bilawal should understand that at this time Rahul is fighting for his existence in his own party. If Bilawal won’t stop following in Rahul’s footsteps, he would also face the same situation in Pakistan. Moreover, the country would reject him much the same way India has treated Rahul.