The billionaire entrepreneur, followed by 43.8 million users on Twitter, has a record of making market-moving comments on the site.

Bitcoin jumped as much as 15% in terms of value to a two-week high on Friday after Tesla Inc and SpaceX CEO Elon Musk mentioned the cryptocurrency in his Twitter bio.Also Read - Bharat Bandh: Twitterati Trend 'India is Open'; Share Pictures, Videos of Normal Life Across The Country

Musk’s page on Twitter simply said #bitcoin with no further explanation, but speculation that the world’s richest man might be a Bitcoin investor was enough to set off a dramatic rally. Prices spiked as much as 15% in a matter of minutes, the biggest intraday move in almost a year. Also Read - Shahid Kapoor Just Picked Kabir Singh Over Jab We Met And All Hell Broke Loose on Twitter 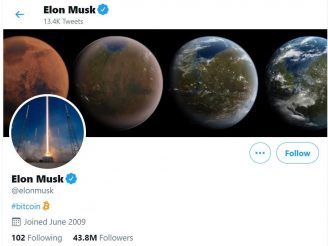 Musk even replaced his pinned tweet, which now reads, “In retrospect, it was inevitable.” This could be in reference to the growing discontent around stocks, and he has been tweeting about the GameStock phenomenon.

In retrospect, it was inevitable

The billionaire entrepreneur, followed by 43.8 million users on Twitter, has a record of making market-moving comments on the site.

Much like his previous ‘Signal’ tweet, his change in Twitter bio helped Bitcoin’s price leap higher by almost 20% in 20 minutes, leaving the Internet and users worldwide stunned. Here are some of the hilarious reactions that followed:

Bitcoin jumped over 300% last year, as bigger US investors and corporations sought exposure to the cryptocurrency. It touched an all-time high of $42,000 last month.

It’s not the first time Musk has hinted at crypto assets. Earlier this month, he agreed with a post referencing being paid in Bitcoin, and when someone asked if he owned any Dogecoin, he replied, “No, but maybe one day.”

In December, Musk asked about the possibility of converting “large transactions” of Tesla’s balance sheet into bitcoin, in a Twitter exchange with a well-known advocate for the digital currency.

Smaller cryptocurrencies including ethereum and XRP that tend to move in tandem with bitcoin also jumped, as much as 5% and 8% respectively.