If Finance Minister Arun Jaitley is finding hurdles to go after black money account holders; here is a list of 6 steps suggested by Dr Subramanian Swamy. 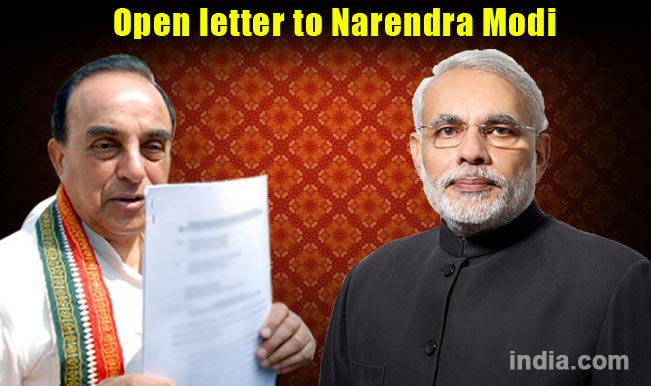 It is well known that bringing back black money has hit a roadblock and with Finance Minister Arun Jaitley giving the excuses of Double Taxation Avoidance Agreements (DTAA), it has done more harm than good to BJP-led NDA government’s credibility. Narendra Modi in his second address (Mann Ki Baat) to nation through All India Radio on November 2, also mentioned that people should trust him and promised that every single penny stashed abroad will be brought back.

Senior Bharatiya Janata Party (BJP) leader Dr Subramanian Swamy had written an open letter to Modi after the Supreme Court embarrassed the Central Government’s proceedings in pursuit of illegal Swiss accounts’ holders. A lawyer by practice, Dr Swamy mentioned six simple steps in his letter, which if followed would recover the money stashed abroad easily. It is a little-known fact that both Swamy and Jaitley share a cold vibe.

If the probe after black money and illegal foreign accounts is allegedly not proactive and if the current finance minister is finding hurdles to go after black money account holders; here is a list of six steps suggested by Dr Subramanian Swamy. The following steps were mentioned in the open letter to Prime Minister Narendra Modi.

Pass an ordinance (adopt Fali Nariman’s private member’s Bill introduced in the Rajya Sabha when he was MP) declaring all illicit wealth stashed abroad as national wealth and conveying to all foreign holders that they are obliged to bring back all such monies into Indian financial system and subjected to thorough investigation of any illegal transactions leading up to such accumulation of illicit wealth by Special Investigation Team (SIT) set up by Honorable Supreme Court. This will greatly help in bringing back black money which is about Rs. 120 lakh crores, back to the country.

Review the reasons why the Exchange Earner’s Foreign Currency (EEFC) Account authorized by RBI has been bypassed leading to black money accumulated mostly in tax havens such as Switzerland, Mauritius, Cayman Islands, Singapore etc. Revise this EEFC to authorize the Indian banks to operate the required accounts in foreign currencies and to refuse permission to Indian citizens seeking to open such accounts outside financial system of India.

Scrap the participatory notes scheme, which scheme was opposed by the Tarapore Committee. All monies held by Indian citizens under the Participatory Notes schemes should be declared as black money by the Ordinance as suggested in Step 1.

Direct CBI to probe the disclosure that I made in a letter to the Finance Ministry about Ms Sonia Gandhi and her son’s accounts in Sarasin and Pichet Banks in Zurich.

Specific instances of black money like those of Hassan Ali, and Moin Qureshi should be specially investigated.

Please ask all your ministries to give an affidavit to you declaring that they do not operate on their own behalf or through their immediate family members, any undisclosed or illegal foreign accounts.

“We are all very sorry for the unnecessary and avoidable disappointment of party supporters and general public regarding the handling of the black money issue in the Supreme Court,” read a part of Subramanian Swamy’s letter. With Assembly Elections in Jharkhand, Jammu and Kahmir, Delhi nearing; it will be interesting to see if the Narendra Modi-led government take lessons from their past mistakes and follow the simple 6-point agenda mentioned above. Read the entire letter below: