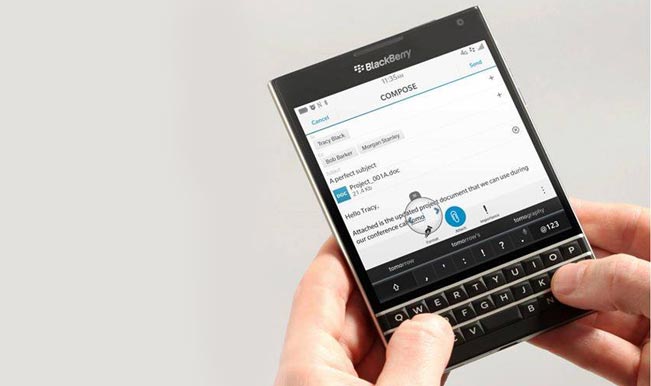 BlackBerry launched its Passport smart phone with 4.5-Inch Square Display and BB10.3 Operating System at events in Toronto, Dubai and London on Wednesday. Earlier this week, the company CEO, John Chen had revealed its price. The unlocked version is priced at $599 which would come around Rs 36,500 in India. Also Read - BlackBerry Advances Its Commitment to Building Secure Autonomous Future

A note worthy feature of the phone is the size of the screen which is 4.5 inched square in shape and has a IPS LCD capacitive touch screen along with a QWERTY keypad. It works on a Qualcomm MSM8974AA and  Snapdragon 800. It also has the famous multi touch feature that allows up to 10 fingers to work on the screen at once. Also Read - BlackBerry QNX at CES 2018: All You Need to Know About Software For Automotive Future

The phone measures 128×90.1×9.3mm, and features a Nano-SIM card slot. Connectivity options include Wi-Fi a/b/g/n/ac, Bluetooth 4.0 LE, Micro-USB + Micro-HDMI via SlimPort, USB OTG, NFC, GPS, DLNA, Glonass, GPRS/ EDGE, 3G, and 4G LTE. It also supports a feature of the patent company-BlackBerry Assistant along with the BlackBerry Hub that has Instant Actions. BlackBerry 10.3 also allows users to access the Amazon Appstore for Android and around 240, 000 apps.

The phone will also reach Indian hands with the company that will likely announce the phone in India on September 29. John Chen at the launch also announced that the company will announce BlackBerry Classic smart phone before the end of the year. It was also revealed at the launch that the Passport phone will be available at ShopBlackBerry.com immediately after the launch for customers in Canada, France, Germany, United Kingdom and United States.

At the launch, the difference between BlackBerry Assistant, Siri and Google Now was explained. They said that BlackBerry Assistant was made especially for work but can access both work and personal information even with enterprise level security. The Company explained the revamping as to meet the needs of the meet in a better way.