Even as Kareena tried to pull him away, Taimur remained engrossed with the cat.

The day is never done until we see a picture or video of Taimur Ali Khan and his antics. The little munchkin was spotted earlier in the day with his mother Kareena Kapoor Khan outside Mehboob Studios in Mumbai. As always, he had photogs following in his footsteps and as always he did not disappoint them. This time round, Taimur was seen getting down from the car with his mom, and as they were walking away he spotted a cat. His immediate reaction was a loud “Meow”. Also Read - Kareena Kapoor Khan Motivates People Amid Coronavirus Crisis, Says ‘Stay Strong, We Can And We Will’

Even as Kareena tried to pull him away, Taimur kept on looking and pointing at the cat that was sleeping in the parking area of the studio. Kareena said it was a cat and Taimur again went “Meow”. In the end, his mother had to lift him up in her arms as he refused to budge. Check the video out below: Also Read - Taimur Learns to Grow Plants With Daddy Saif as Kareena And Family Make Best Use of Quarantine Time - See Viral Photos

Both mother and son were twinning in white and blue, but it was Taimur’s expressions that caught everyone’s attention. Taimur looked absolutely adorable in a white ‘I Love Sydney’ tee which was paired with blue shorts. 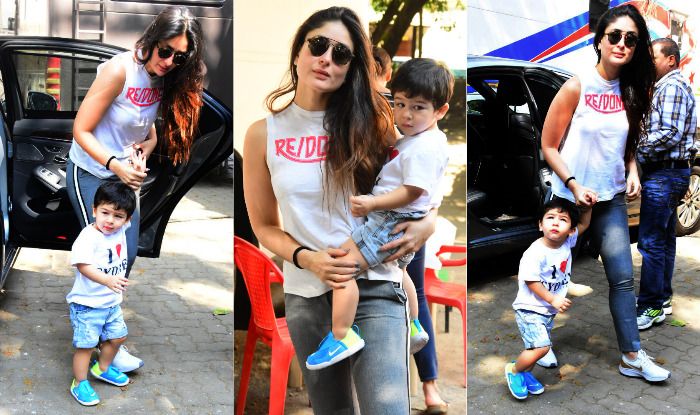 And it is not only us who cannot get enough of the little boy, as it was recently revealed that he has his own fan following already, that too at the age of two, and they have created a doll in his likeness and even named it Taimur.

When asked about it, Kareena said that she was happy about the doll and that she cannot deny that her son is popular, though both she and Saif are trying to raise Taimur without the glitz and glamour of the industry.