Every single person is performing the bottle cup challenge with a smart kick. But there is someone who opens the cap of the bottle without even touching it. American singer Mariah Carey has taken the viral challenge to the next level and for sure she is the winner. Also Read - Year-Ender 2019: From the Funny Paragliding Act to Ranu Mondal's Singing, 10 Viral Videos This Year

Famous for five-octave range, Mariah Carey did not use a spin kick like the challengers. In the video, she can be seen singing a high note in front of a bottle and magically removing a cap from a bottle- with a voice. Yes yes, some clever editing must have been done but that doesn’t make it any less amazing. Also Read - Virat Kohli Unnecessarily TROLLED Over His Bottle Cap Challenge Ahead of 2nd ODI vs West Indies | SEE POSTS

The video has gone viral and crossed 3,210,694 views as of now. While sharing the clip, she writes, “Challenge accepted! #bottlecapchallenge” Also Read - Bottle Cap Challenge: Bhojpuri Hot Bomb Monalisa Aces The Challenge in The Most Unique Way

Here is how people reacted to Mariah Carey’s #BottleCapChallenge: 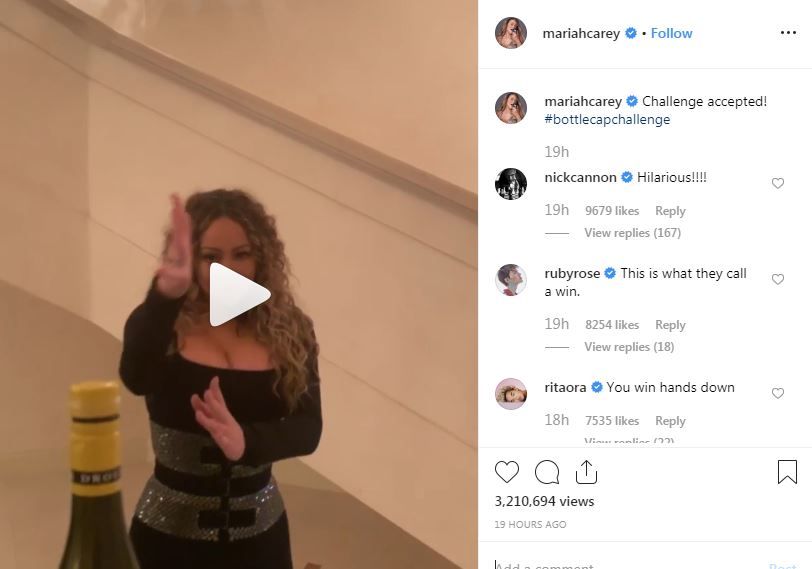 She wins. She Always wins. https://t.co/JWfwMoFIS5

Me looking at people trying to beat this pic.twitter.com/zHQ57i08pT

Bottle Cap Challenge encourages millennials towards fitness. The aim is to invite best precision kicks as it needs some foot-eye coordination involving the task of opening a bottle cap with a kick. The Internet is full of the hashtag #BottleCapChallenge and most of the videos are shot in slow-motion to intensify the movement.