Notably, Burger King had tweeted, "Women belong in the kitchen," in a bid to promote their new culinary scholarship program, but provided no context behind it.

A day after Burger King UK sparked massive uproar online for its International Women’s Day tweet that said, “Women belong in the kitchen”, the fast-food giant has apologized and deleted the controversial tweet. Notably, Burger King had tweeted, “Women belong in the kitchen,” in a bid to promote their new culinary scholarship program, but provided no context behind it. Moments after the ‘sexist’ tweet, many users called out the company and expressed their disappointment by the brand’s choice of language.Also Read - Women Belong In The Kitchen: Burger King Tweets And Flood Gates Open

Before pulling the tweet, Burger King issued a statement acknowledging its initial tweet missed the mark. “Our tweet in the UK today was designed to draw attention to the fact that only a small percentage of chefs and head chefs are women. It was our mistake to not include the full explanation in our initial tweet and have adjusted our activity moving forward because we’re sure that when people read the entirety of our commitment, they will share our belief in this important opportunity.” 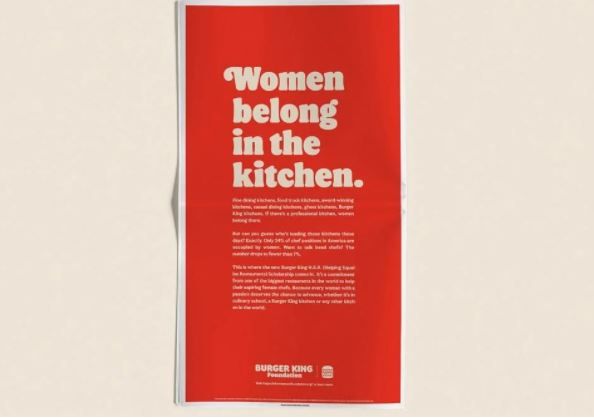 “We decided to delete the original tweet after our apology. It was brought to our attention that there were abusive comments in the thread and we don’t want to leave the space open for that,” the company said.

“We hear you. We got our initial tweet wrong and we are sorry. Our aim was to draw attention to the fact that only 20% of professional chefs in UK kitchens are women and to help change that by awarding culinary scholarships. We will do better next time,” Burger King UK added in its Twitter thread.

We decided to delete the original tweet after our apology. It was brought to our attention that there were abusive comments in the thread and we don't want to leave the space open for that.

Along with the tweet, the fast-food chain had also published a full-page ad on the New York Times print edition, which read, “Women belong in the kitchen.” The company was heavily criticised for the comment but the American fast food, on the other hand, defended their comment and said that it was part of their campaign for gender equality.

“Our “thought process” is that women are shockingly underrepresented in our industry, and we thought it was time we did something about it. We’ve created a scholarship to give more of our female employees the chance to pursue a culinary career,” the Burger King UK tweeted in response explaining the intent of the ad.

Even after the tone-deaf tweet was deleted, netizens weren’t convinced and bashed the company for approving the original tweet in the first place:

Wait so you only deleted because of that but not because what you tweeted was distasteful? That's a pitiful non apology. https://t.co/Ch7y9NuD2y

How stupid can you be? Especially on International Women’s Day… #smh https://t.co/FvEeHQh9am pic.twitter.com/LgkrKo5NZC

Put women on your marketing or social media teams. That tweet should never even have been considered.

I like how they deleted the original tweet because of the ‘abusive comments’ and not because burger king did an oopsie pic.twitter.com/Rl4mbg3GnY

As someone who works in Social Media Marketing, you should be embarrassed with yourself!

That tweet should have never been sent out to begin with.

Are you rounding up copies of all the print advertisements too? It is simply too late … the train has left the station my friend. How about this, start by creating an environment where people truly understand that this is never okay. This is not a strategy, this is just sad. pic.twitter.com/OdR6dry1iV

What do you think of the whole issue?